Wearing the badge comes with tremendous responsibility and power. That’s how Earl “Nickey” Picard always approached it, especially when it came to how that power would be shared. Picard was the city marshal of Lafayette for three decades until 2014 when he was eliminated in a three-man primary. He is the longest-serving marshal in the century-long history of the Lafayette City Marshal’s Office.

During his 30 years in the office, Picard was stingy with commissions — the official act of deputizing individuals, providing them with badges and/or commission cards and the arrest powers that often go with them. When he left office in January 2015, Picard had 15 active commissions for nonemployee reserve deputies, all of whom had to undergo rigorous training and work at least 16 hours for the marshal per month — they could earn pay for off-duty work like security at a mall or football game but didn’t get a paycheck from the marshal — to keep their commissions.

Since taking office in January 2015, Picard’s successor, Brian Pope, has doled out more than 50 official commission cards and badges to individuals who are not full-time deputies.

So what exactly has changed in the last two years to make Pope need so many more reserve deputies than Picard ever needed? If you look at the history of Louisiana law enforcement, it’s Picard who went against tradition. In fact, the practice by heads of local law enforcement agencies — sheriffs, city marshals, police chiefs — handing out badges and commission cards to friends, family and political allies goes back many decades. It’s a long-standing tradition, says Picard.

“Sheriffs back then were known for that. 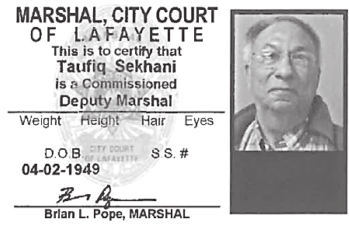 They’d give out a bunch of commissions,” recalls Picard. “I started with [Louisiana] State Police in ’53, and I remember early on they told us that when someone pulled that commission card out to take it. Everybody and their cousin had one back then. We would have to mail them to the state police colonel, Francis Grevemberg, and he would take those commission cards and cut the corners to make them round. He would say it was ‘so it wouldn’t hurt them when I tell them where to put it.’ He told us he wanted them picked up. And we sure did encounter people who’d pull the card on us.”

Those commission cards. What powers did they really hold for the average Joe? They likely helped with speeding tickets.

Putting in a full career with state police, Picard confiscated his share of commission cards. He would eventually retire from state police and become Lafayette’s marshal in 1984. For the next 30 years, Picard, like Pope now, again found himself dealing with commission cards. But under Picard, getting a commission meant having to meet certain requirements, like completing more than 200 hours of reserve deputy training sessions, and passing a psychological evaluation, drug screen and physical. After that, Picard says, his reserve deputies had to work a monthly minimum of 16 hours to maintain their eligibility for off-duty work assignments.

When Brian Pope took over from Picard at the start of 2015, all of Picard’s commissions expired, including his 15 reserve deputies. It didn’t take long, however, for Pope to replenish the ranks, creating what’s since become the biggest reserve deputy force in the history of the marshal’s office. Information obtained in January from the Lafayette Parish Sheriff’s Office, which as a courtesy processes and prints the cards for the marshal’s office, shows Pope has so far signed off on 72 commission cards, less than a third of which appear to be for full-time employees. In response to The Independent’s public records request for all of the deputies he has commissioned since taking office, Pope initially provided the names of 22 full-time deputies (all of whom are on the sheriff’s list) and only 42 reserve deputies. His and the sheriff’s numbers simply don’t jibe, meaning Pope himself has no record of a number of his own reserve deputies and has clearly lost count. When asked about the discrepancy, Pope said in a written statement that he obtained the list from the Lafayette Parish Clerk of Court, claiming the clerk and Louisiana secretary of state (not his office) are responsible for keeping the “master list” of commissioned deputies.

Seventy-two. Picard could not believe what he was hearing. “That’s 10 times what I had,” the former city marshal says. “I think he’s just commissioning people that maybe helped him get elected.” (Campaign finance reports support this assertion for some of those commissioned.)

According to invoices from Guidry’s Uniforms included in Pope’s March public records response to The Independent, 53 badges have been ordered since he’s been in office. Of the 53 badges — for which the marshal’s office has paid more than $6,000 at $120 a badge — Pope has handed out 18 to reserve deputies, those records show.

Running through the list of Pope’s commissions with The Independent, Picard encounters a few familiar names — like Frank Michael DiBenedetto, who runs a private security business and for a time was commissioned when Picard was marshal. DiBenedetto, however, had his commission revoked, according to Picard, when he failed to meet the requirement for working 16 hours per month. When Picard left office, DiBenedetto, who retired as a lieutenant with the Lafayette Police Department amid an investigation into overtime pay a decade ago, reclaimed his commission as a reserve marshal’s deputy. Pope made it happen on Oct. 1, 2015.

Picard’s memory was jogged again with another name on Pope’s commissions list: 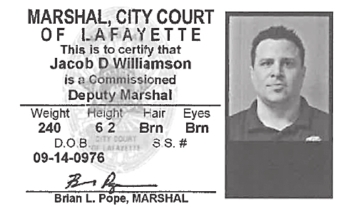 Taufiq M. Sekhani, who, among other ventures, is an apartment complex owner. Federal court records show Sekhani was involved in a 2008 settlement with the U.S. Justice Department over refusing to rent his Pecan Terrace apartments to people with children.

“I know Sekhani,” Picard says. “We did a lot of work with him, and my concern was that I didn’t want him to use that card to do his evictions because he was not a police officer. That’s why I never did commission him.”

A theme emerges as the former marshal continues hearing the names of his successor’s commissions. It’s a theme of people once denied or deprived of a commission under Picard who now make up the card-carrying deputy reserves of the Lafayette marshal’s office. It’s not all of them — as some are trained and do put in the hours — but they are certainly there scattered throughout Pope’s list.

There’s Lafayette businessman Jacob D. Williamson. You’d be hard-pressed to say Williamson represents what we’d expect in a model reserve deputy, beginning with a string of misdemeanors in 1999, including criminal mischief, disturbing the peace by intoxication, illegal carrying of a weapon and false impersonation of a police officer. Williamson pleaded no contest to all of those counts in 2000, court records show. If that doesn’t raise any flags, there’s also his arrest on possession of marijuana, and possession with intent to distribute the schedule IV narcotics Clonazepam and Diazepam. Again, he would plead no contest to the marijuana charge, with the possession with intent to distribute dismissed in 2000. Williamson was later arrested on a felony for issuing worthless checks. The state filed a written motion to dismiss in 2013, the court record confirms. Williamson has also been the target of nearly a dozen civil suits filed either against him, his wife, or one of his various construction/painting companies.

There’s also Oren Haydel on the reserve deputy list. A former corporal with the Lafayette Police Department whose wife works full-time for Pope, Haydel was fired from the department in 2011 amid allegations that included falsifying police reports and damaging public records, according to The Advocate. Also commissioned by Pope is Kenneth Franques, who was in the news earlier this year after being arrested in connection with the ongoing investigation into the bribery scandal involving former District Attorney Mike Harson’s office.

Gregory "Scotty" Carriere, Ronnie Mahtook, Lane Cortez, Chris Starling and Bobby Rhyne, the 25-year-old son of a well-connected family. The list goes on and on.

Time sheets submitted during Pope’s first 13 months also show a lack of involvement among the great majority of the marshal’s large reserve force, as most have yet to submit a time sheet, meaning they’ve logged zero hours. Again, records show that only eight of Pope’s reserve deputies have actually used their commissions for their intended purpose by either attending a training course or by spending time on the job working for the marshal’s office. And most of them are falling far short of what was demanded not long ago under Picard. 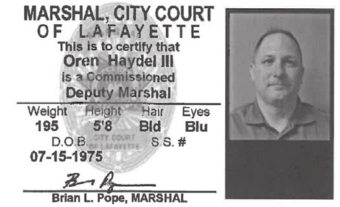 So what does all this tell us about our city marshal and the office he runs? We’ll let readers decide. But viewed against the backdrop of his ongoing public records battle with this newspaper — a war in which he has repeatedly lost on front after front — not to mention an ongoing grand jury investigation into possible felony charges against Pope related to that public records case, arriving at that decision should be easy.

Whether it’s political allies, businessmen with obvious conflicts of interest or even men with mild criminal histories, we should not be surprised by the presence of questionable names on Pope’s list of commissions, or that only a few of them actually managed to put in the work that should be required of all reserve deputy marshals.

It’s what we’ve come to expect, and it could only be a matter of time before Lafayette gets second chance to make up for the bad choice it made in the 2014 election for city marshal.

[*indicates commissions who appear only on the list supplied by the Lafayette Parish Sheriff’s Office. Despite being commissioned by Marshal Brian Pope, they are not included on the commissions list he supplied to The Independent.]

Below are the commissions missing from Pope’s list but included in names supplied by LPSO, which as a courtesy handled the process of printing all commission cards for the marshal’s office until January of this year. LPSO last printed a commission card on Jan. 23 for Knowles Leroy Jones, its records show.

Reserve deputies with badges, according to records obtained from Pope through a public records request:

[*Cormier’s and Menard’s names do not appear on either of the commission lists provided by Pope and the LPSO. Their names do, however, appear on a list of names released by Pope showing the people he’s given badges to since taking office.]

Training hours logged by reserve deputies between January 2015 and March 2016: