The Strangers is a terrifyingly simple horror story — with a terrible ending. 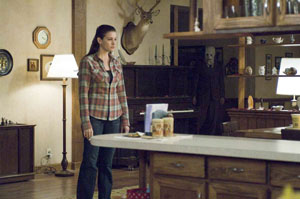 Someone’s in the kitchen with Kristen (and in the bedroom and in the living room) in The Strangers.

Something bad has already happened.

Before the first eerie 4 a.m. knock on the carved wooden front door, before the growing realization that there is someone out there in the dark, before the ax and the knife and the blood, there was the marriage proposal.

The first time we see Kristen (Liv Tyler) and James (Scott Speedman), they are sitting in silence at a red light on a deserted street. Tears streak Kristen’s face. The light clicks to green, and the couple continues on uncomfortably to the summer home of James’ family. Tonight was supposed to be a night of celebration: a friend’s wedding, followed by their own romantic engagement, with the promise of starting a long and lazy road trip together tomorrow morning. But the champagne and rose petals that await Kristen inside are only so much vinegar and ash. James has asked the question already, breathlessly in the chilly parking lot of the wedding reception; Kristen has given an unexpected reply. She’s not ready, she says.

But she has no idea what’s coming.

As the two wounded lovers talk and touch, seeking comfort in each other, there’s a knock at the door. In the shadows of the early morning hour, a small blonde asks for Tamara. They tell her there is no Tamara here, close the door and comment on the strangeness of the wee-hours visit.

When James decides to drive into town to clear his head and buy cigarettes for Kristen, the blonde returns. And brings two fiendish friends with her.

What follows is an agonizingly paced, straightforward tale of terrorization. James and Kristen find themselves increasingly at the mercy of their masked tormentors: The Man in the Mask (Kip Weeks), Dollface (Gemma Ward) and Pin-Up Girl (Laura Margolis). The cat-and-mouse game moves from the house to the back yard and back to the house. The bad guys have free run of the sprawling ranch house. When they ax their way through the front door, it isn’t to get inside; it’s to create maximum panic in their prey. They’ve been inside since the beginning, after all, stealing cell phones, moving the fallen cover of a smoke detector and — in one of the film’s most subtly creepy moments — standing in the shadows behind an unsuspecting Kristen.

James and Kristen fight valiantly, wildly aiming dad’s old shotgun, barricading themselves backs-to-the-wall in a dark room, desperately trying to use an old radio in the backyard shed to call for help. But they are overmatched by their relentless pursuers — and under-served by their own stay-in-place mentality. Things happen so fast, their panic escalates so quickly, that running to the open woods or road doesn’t seem to ever occur to them as a possibility. In that paralysis of fear, that refusal to really accept the insanity enveloping them, they sit pretty for a sad ending.

First-time writer and director Bryan Bertino credits true events for inspiring his tale, but the way he builds his movie brings to mind ragged ’70s horror like Last House on the Left and the original Texas Chainsaw Massacre. The Strangers isn’t slick, and it is — at times — startlingly silent. The scratchy sounds of LPs played on a turntable provide a soundtrack scarier than any over-orchestrated score. Bertino fashions a few jump-out-of-your-seat gotchas, but mostly the movie gets by on the terror of the threat. The buildup is excruciating, as the now-you-see-them-now-you-don’t intruders taunt Kristen and James. And, best of all, there’s no attempt at exposition or explanation for what is happening. When a whimpering Kristen asks “Why us?” one of the masked girl replies, “Because you were home.” And that’s all you get, a monotone line that speaks volumes about the randomness of cruelty and evil.

Why hasn’t anyone thought to put Liv Tyler in a scary movie before? Her long face and large eyes are a perfect playground for stress and fear.

The movie’s three masked murderers are well-placed and perfectly used by Bertino, but it’s Tyler — her pain and disbelief and uncertainty about what to do — that makes the interminable ordeal a little more than just another torture-porn popcorn flick.

In the end, The Strangers would be a cut-above horror movie — if it weren’t for the end. The retro freshness of the way Bertino films makes up for a few run-of-the-mill scary movie mistakes: protagonists who do horribly stupid and foreseeably disastrous things, for example, and a continuity snafu that has Tyler limping, then on solid footing, then back to limping again. When the ending comes, however, and the audience is sinking into a kind of shuddering relief that it’s over, even as they know they’ll be glancing sidelong at closets and curtains for weeks, Bertino makes a fatal mistake. And that’s not stopping the scare soon enough. But, like one of his crazed killers comments, “It’ll be easier next time.”