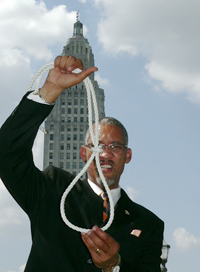 State Rep. Rickey Hardy's bill to outlaw nooses displayed as a threat is another step closer to becoming Louisiana law. On Monday, the House unanimously approved House Bill 726, which "creates the crime of public display of a noose with the intent to intimidate."

Hardy's bill comes after racial hostilities flared in Jena in 2006 after nooses where hung from a schoolyard tree. Six black teenagers at Jena High School later beat a white classmate and were charged with attempted murder. The case of the Jena Six garnered national attention resulting in a march on the small central Louisiana town.

Incidents of nooses being displayed in public places rose in both Louisiana and across the nation. New York recently outlawed the displaying of nooses as a threat, making it a felony punishable by up to four years in prison.

In an editorial today, The Advocate calls Hardy's bill "misguided."

When displayed by the evil-minded, nooses can be used to evoke the days when lynching was used to brutally intimidate African Americans. But some displays of nooses, such as those used in museum exhibits, Halloween haunted houses and in pep rallies where effigies of opposing mascots are strung up, are not offensive.

Instructively, Hardy’s bill seeks to outlaw the public display of nooses "for the purpose of intimidation." But just who decides when intimidation was intended? ... The lopsided vote of approval suggests that no one wants to oppose this bill for fear of being cast as politically incorrect. But this legislation’s attempt to limit expression seems unconstitutional and subject to expensive court challenges.