[Editor's Note: This article had been corrected to reflect that a side of ribs at 2 Paul's is actually $2.99, not $1 as originally reported, even though the author was charged $1 on his recent visit and the restaurant's website says the side order is $1.]

Look, I was incredulous myself when I learned that you can get a side of rib for $2.99 at 2 Paul’s Radically Urban Barbeque. I shoved my phone into the cashier’s smile and demanded clarification. Can I or can I not get a burger with a side of brisket or rib? Does the brisket or the rib come on the burger? Tell me. Inquiring minds await. 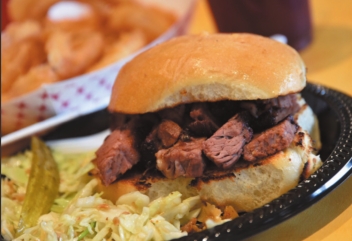 I had already been to 2 Paul’s to try the burger at the suggestion of IND Photo Editor Robin May, who suffers my adventur-ism in terms of both cuisine and geography with nary a gripe. Robin’s suggestion was on the money: cooked to temp (in my case medium) the top-grade patty was meaty and moist, greasing up a resilient but pliably soft sourdough bun with a tasty mess of condiments. A basket of barbecue sauces sweet, spicy and mild serves as an upgraded lot of dippers for 2 Paul’s seasoned fries. Cut slightly thicker than julienne but thinner than steak fries, these gems mirror the burger’s umami and bun’s starchy fluff.

It’s rare that I make a second trip to a restaurant for the purposes of this column, though I often return after publication, but further research into 2 Paul’s menu revealed a terrible journalistic oversight — meats are available as sides. Stop the presses. Initially, I understood the menu tidbit to suggest that one could, in a stroke of heart-stopping genius, top a charbroiled burger with either brisket or a rib or, as a thinking man would suggest, both. My hunger was no less voracious when I discovered the ribs and brisket were meant as accompaniment. As I’ve explained to my doctor, it is my journalistic responsibility to suss out such details, regardless of what havoc it wreaks on my cardiovascular health.

I alternated bites in an unholy trinity of saturated fats — burger, fry, rib, burger, fry, rib. My heart swelled, my hangover dried up, and I regretted nothing more than not ordering a second rib. That would have cost but one more dollar and shaved one minute off a shortened but sweetened life.

Pro Tip - Yes, the ribs and brisket come on the side of the burger. That doesn’t mean you can’t put it on the burger yourself. Maybe not such a good idea for the rib. But hey, it’s a free country until January 2017. 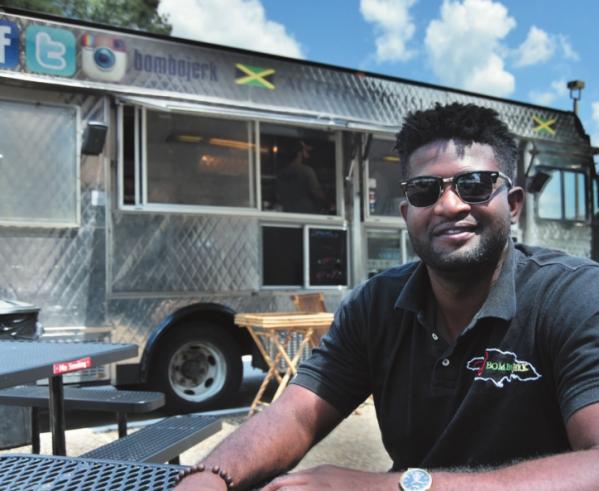 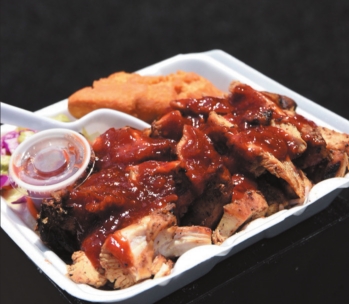 I visited “Jamaica” once, the part of the tiny island nation carved out of Montego Bay as an American vision of paradise — all-inclusive (except for the natives) international buffets with plenty of American cheese, swim-up bars, beach reggae and a wide spectrum of bland to blazing hot jerk chicken. Thus my impression of authentic Jamaican living is poorly focused and doubly inaccurate. Perhaps that works to the advantage of Bombo Jerk, but I could never say for sure. As noted in previous iterations of this column, I don’t anguish the accuracy of a dish so much as its flavor and my enjoyment of it. And in any case, reading about the dumpster-fire political violence of gangland Kingston in the 1970s, particularly surrounding the attempted assassination of Bob Marley, I’m not sure that any white guy really knows what real Jamaica or real jerk chicken is, even if he grew up listening to Desmond Dekker and audiobooks about Garveyism.

Sorry, folks. I’ve given you enough to Google. Let’s talk food truck Jamaican food. For what it’s worth, the folks that own the truck are, in fact, from Jamaica. So if that matters to you, so be it. But what matters to me is fried bread and Kool Runnin sauce. Let’s not divert into the classic American film starring Doug E. Doug and John Candy, but rather discuss the obvious virtue of a fried cornbread dunked at your leisure into a plastic ramekin of spicy herbed mayo called kool runnin sauce— a Bombo Jerk invention, I believe — and crumbled like doughy rain into the nooks and crannies of a bed of rice and red kidney beans. Yes, the chicken is legit — both succulent and fragrant with a colonial spice blend that is the true gift of Victorian imperialism: Indian cinnamon, Caribbean sugar and scotch bonnet pepper — but the delicate, crispy corn fritter called Festival bread is a marvel whatever its origin.

Pro Tip - Bombo is a patois exclamation that has no specific meaning. It’s sort of like “bloody” in English slang or “yuge” in Trump’s nativist dialect. Just don’t say “bombocloth” around any Jamaican kids and you should be good.

You can find the Bombo Jerk food truck at a variety of parking spots and lots around Acadiana. Check out Bombo Jerk’s Facebook page for daily locations.