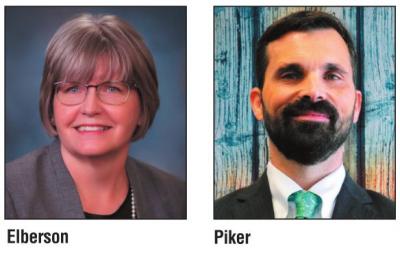 The Lafayette Public Library System has named Teresa Elberson its new director. She replaces Sona Dombourian, who retired on April 30 after 35 years with the system. Elberson previously served as library administrator for 11 years, overseeing all aspects of library operations for the system’s nine branches throughout Lafayette Parish and developing library policies and procedures. She also supervised the managers of each of the system’s largest libraries, including the Main Library in Downtown Lafayette, the East Regional Library in Youngsville, the North Regional Library in Carencro and the South Regional Library on Johnston Street. Elberson also previously served as head of circulation and head of access services for the library system. Elberson has been with the Lafayette Public Library since 1982 and holds a master of library and information science from LSU, an MS in botany from Miami University in Ohio and a BS in biology from Missouri State University.

Kevin Piker has joined Jennings-based JD Bank as VP and commercial/agricultural lender. Piker has more than 16 years of experience in the banking industry and has lived in Lafayette for a decade. He works at JD Bank’s Verot School Road branch. Piker is a UNO alumnus and has previous experience in wealth management, personal banking, investments, consumer lending and tax-exempt financing. He spent his entire banking career at JP Morgan Chase, where he most recently was VP and business banking relationship manager.

Crowley-based JohnPac Inc. has opened a distribution center in central Houston, the company announced in a news release. The industrial packaging firm says the new 50,000-square-foot location at 1219-A North Post Oak is designed to support existing customers’ needs and ongoing growth in the Texas market. JohnPac makes daily deliveries into the greater Houston market from its Louisiana warehouse, “but we also understand the need to adapt to our customers’ needs by providing local support for security of supply and emergency same-day delivery capabilities,” the company notes in the release.

JohnPac, which has been in business for 54 years, manufactures polypropylene from granulate to end product, creating everything from yarns to fabrics for products like bulk bags, small poly weave bags and BOPP bags. The company has more than 200,000 square feet of distribution space in Crowley, which enables it to offer shipping of in-stock items within 24 hours.

CBM Technology ranks among the world’s most progressive 501 Managed Service Providers, according to Penton Technology’s 9th-annual MSP 501 list and study. The list is based on data collected by MSPmentor and its partner, Clarity Channel Advisors. Data was collected online from March through April of this year.

Our Lady of Lourdes’ Center for Advanced Wound Care & Hyperbaric Medicine received the Center of Distinction Award from Healogics, the nation’s largest provider of advanced wound care services. The center achieved outstanding clinical outcomes for 12 consecutive months, including patient satisfaction higher than 92 percent, and a minimum wound healing rate of at least 91 percent within 30 median days to heal.

Home Bancorp Inc., the parent company of Home Bank, was recently named to the Russell 3000 Index, which measures the performance of the 3,000 largest US-traded stocks based on market capitalization. Russell US Indexes are the leading U.S. equity benchmarks for institutional investors.