After 12 years hosting the state’s Top 28 boys high school basketball tournament, the Cajundome might be out of the running. From the outside, it looked like a perfectly happy marriage, with two partners who’d been together for more than a decade. But without any warning, the Cajundome’s Greg Davis got the equivalent of a Dear John letter last week, and was left feeling like a jilted spouse. 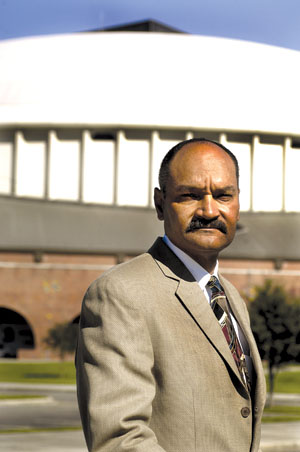 "We’re very disappointed in LHSAA for handling the bid process the way they did. The process has been severely compromised. The Cajundome does not do business that way."
— Cajundome Director Greg Davis

After 12 straight years in the Cajundome, the state’s Top 28 boys high school basketball tournament isn’t likely to return to Lafayette next year. Cajundome Director Davis says the chances appear to be “very slim” following last week’s meeting of the Louisiana High School Athletic Association’s executive committee. The committee rejected the Cajundome’s bid to host the tournament for the next two years; a last minute bid from Shreveport’s CenturyTel Center also was rejected because it came in past deadline. However, the committee opted to re-open bidding and have both the Cajundome and the CenturyTel Center re-submit their proposals.

The move stunned local organizers with the event, who note that Lafayette has helped make the Top 28 a success. The Cajundome holds the six highest attendance records for the tournament, and community support includes a host of volunteers, restaurants and caterers that donate all meals for the teams, and local “blue coat” sponsors assigned to assist each high school participating in the tournament.

“We’re very disappointed in LHSAA for handling the bid process the way they did,” Davis says. “The process has been severely compromised.” The Cajundome was the only vendor to submit a timely bid and make a presentation to the LHSAA executive committee — but the committee still opted to reject it. “The Cajundome does not do business that way,” says Davis.

LHSAA Commissioner Kenny Henderson counters that LHSAA is a private organization and is not subject to state bid laws. He says the Cajundome will have an equal opportunity in the second round of bids, which the committee is expected to consider in early July. “I don’t think anybody can be any happier with the job that Lafayette has done hosting the Top 28, and I’d love to see it go back to Lafayette,” Henderson says. “But it’s also a business deal, and hopefully everybody will understand that we’re trying to make money off this.”

Henderson, who is from north Louisiana, says the Cajundome’s original bid for the tournament was rejected on the basis that it included a $55,000 fee for hosting the event. The commissioner says the charge is unacceptable. “We’re like any other business,” he says, “and that’s one of the ways that we put money back into our schools and run our organization is with that state championship event, and so we’re trying to make as much money as we can. If we don’t have to pay $50,000, then that’s just more money that we have to operate on.” Henderson confirms that the CenturyTel Arena’s last-minute bid for the Top 28, which was not made public, included a lower facility fee.

For the first nine years of hosting the tournament, the Cajundome did not charge any fee to LHSAA. The Cajundome also did not include a charge in its last contract for the tournament, approved by the LHSAA four years ago. However, a year into the contract, with attendance high and the Cajundome struggling with its expenses, former LHSAA Commissioner Tommy Henry agreed to give the dome a $50,000 facility fee. LHSAA’s finance committee signed off on the deal . Prior to that, the dome was keeping only concession sales, while LHSAA took all ticket proceeds. (In the past 12 years, LHSAA has grossed $3.8 million in Top 28 ticket sales.) The dome provided staff, VIP rooms and meals. Davis says Henry negotiated the fee based on provisions in the contract and the fact that LHSAA pays the Superdome $70,000 to host its other marquee event, the state high school football championships.

Henderson says Lafayette should look at the bigger picture. He notes the LHSAA has estimated the Top 28 tournament, which runs for one week, has a $2.5 million net economic impact on the city. “So, $50,000 is a lot more to us than it would be to [Lafayette] compared to $2.5 million from an economic impact standpoint,” he says.

Greg Davis disputes those figures. And even with the $50,000 facility fee, Davis says the Cajundome lost approximately $20,000 putting on the Top 28 tournament this year. Furthermore, the Cajundome is faced with the additional financial burden of a recent court ruling requiring them to charge an 8 percent sales tax. Davis says the LHSAA is looking for bids with no facility charge, but that’s not a realistic option for the dome. Davis recently met with members of the Cajundome Commission and local volunteers for the Top 28 tournament — and the group decided that the Cajundome would re-submit its original bid for the event. “Our bid stands,” Davis says. “There’s only so much flexibility in that budget, and we are already being stretched.”