Man-boy Adam Sandler makes sweet and stupid slapstick as an Israeli-super-soldier-turned-hairdresser in You Don’t Mess With the Zohan. 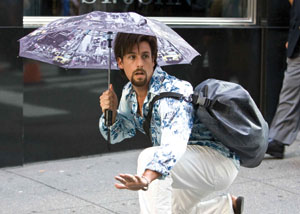 Army man Zohan (Adam Sandler) lands in New York with a dream: to trade his hand grenades for hair gels.

You Don’t Mess With the Zohan is a ridiculous movie title. It has, in fact, the distinct whiff of an early-morning, overly caffeinated brainstorming session, an idiot’s idea that premiered to hoots of laughter and probably should have been allowed to dissolve in the blindingly bright light of a Los Angeles day. Only problem is, what else on earth could this crazy movie legitimately have been called?

It really shouldn’t be much a surprise that insanity — with a heavy-handed helping of inanity — is what came out of a writing process that included Adam Sandler (Happy Gilmore), Robert Smigel (Late Night with Conan O’Brien, Triumph the Insult Comic Dog) and Judd Apatow (The 40 Year Old Virgin, Knocked Up). Individually, these guys have never met a gag (or gag reflex) they wouldn’t try to push to its limits, so the three of them together set off something akin to a nuclear explosion of silly one-upsmanship. Their comic target? Why, the intransigence and inescapability of the age-old Israeli-Palestinian conflict, of course.

Zohan (Sandler) is a man’s mensch, a Jewish James Bond with a bad attitude. Enjoying one of his all-too-rare days off, our curly-headed hero struts his stuff on a golden Israeli beach in cutoff jeans and a Mariah Carey T-shirt (an all-too-common wardrobe choice for him, it turns out). He wows the crowds with his superior hacky-sack-ery (which unfortunately includes maximizing his gluteus maximus), his brute tug-of-war strength and his nude disco-infused fish-grilling (which also unfortunately includes his gluteus maximus). Oh and there’s hummus, lots and lots of hummus. Never in the history of cinema has an opening sequence let an audience know what it was in for quite so honestly.

In need of his super-soldier services, the Israeli army helicopters in and plucks him from his seaside summer getaway. It seems they need him to recapture a Palestinian known as the Phantom (John Turturro), a militant they have captured before but then traded away for two Israeli soldiers and “a spy to be named later.” The politics of protracted war encapsulated in a baseball metaphor — Zohan is really starting to roll. The Mossad go-to-guy, stuffing a chocolate bar deep into a jar of hummus, unhappily agrees to go after Phantom again. He’s good at fighting, after all, and his parents ridicule his longed-for choice of career change: hair-styling. Despite his desire to make the world “silky smooth,” Zohan is — as his father reminds him — “Rembrandt with a hand grenade.” You can’t make this stuff up. Only Sandler, Smigel and Apatow can.

So, of course, the fed-up Zohan fakes his death in the fight with Phantom. Pretending to be Australian-Nepalese and sporting his self-taught hair skills, Zohan tries to start a new life in New York City. Spurned by the chic crowd at the Paul Mitchell salon, Zohan eventually finds himself working for (and falling for) downtown Palestinian hairstylist Dalia (Entourage’s Emmanuelle Chriqui). But not after having his way with her elderly clientele.

Things come to a head (pun oh-so-fully intended) when Zohan is recognized by a Palestinian cabdriver (Rob Schneider) who still nurses a grudge against the curly-haired he-man Hebrew who once stole his goat. The Phantom heads to the Big Apple to finish the job. But an evil real-estate magnate (the big-voiced Michael Buffer) with designs on the neighborhood gets in the way, proof that even historic grudges pale in the face of greedy land developers.

If you’ve already ascertained that Zohan is a mess of a movie, you’ve been paying adequate attention. The story is all over the map, Middle Eastern and otherwise. The script barely hangs together and drags on for far too long. And yet, as with all of Sandler’s work, there is an unmistakable sweetness under all the penis and body-fluid jokes and general buffoonery. That aw-shucks accessibility has always been Sandler’s secret weapon, a kind of shyness not seen in box-office brothers Mike Myers or Will Ferrell.

It’s because of Sandler’s winning ways that Zohan tests your patience but never gets on your nerves. Sandler-as-Zohan is far too cluelessly charming for that, his outdated attire as outrageous as his well-meaning behavior. And the script’s humor occasionally hits the highest of notes: a very brave Dave Matthews cameos as a redneck-for-hire, an equal-opportunity offender. When the movie occasions to provide us with a list of his hates, like a singles ad gone horribly wrong, it is simply laugh-out-loud funny.

And that is Zohan — a terrible mashup of a film, chock full of stereotypes and simple-minded silliness, that still manages to grab genuine laughs. Sandler and friends imagine a world in which warriors want to be hairdressers and restaurant owners and shoe salesmen — and friends. As long as there is a steady supply of hummus and disco. How can anyone be mad at that?