UL Lafayette Press continues to impress. The university press has a slew of new titles out for fall 2016 — children’s books, coffee table tomes, fiction and history. To wit:

Take a photographic journey through the history of Louisiana’s Cajun dancehalls, zydeco clubs, swamp pop honkytonks and Chitlin’ Circuit night clubs with one of the region’s preeminent photographic documentarians. Gould has been shutterbugging South Louisiana culture for more than 40 years. Combined with Fuselier’s expert understanding of the source material, Ghosts of Good Times is a rich examination of Acadiana’s times past and pastimes. 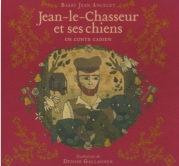 Ancelet, professor emeritus of French Studies at UL Lafayette and a writer, storyteller and singer, spins an enchanting tale based on a Cajun folktale about the titular young man, his three hounds and an evil witch disguised as a fair maiden. While presented in French, Jean-le-Chasseur et ses chiens provides an English translation. As enchanting as the tale are Gallagher’s masterfully earthy, hand-drawn illustrations.

**An Untractable Country: The History of Kenner, Louisiana
**

If you think Kenner is just a wasteland of roofs skirting I-10 as you enter metro New Orleans from the Bonnet Carré Spillway, think again. Bauer, a Kenner native and now history professor at the University of Holy Cross in New Orleans, details the history of a bedroom community that was once a city unto itself — from a colonial settlement to an antebellum collection of plantations and, arguably, site of the first world heavyweight prize fight.

The Land South of the Clouds

Smith’s complicated biography — he’s half black and half Vietnamese who was born in Vietnam and emigrated to the U.S. as a young child — weaves its way through the Louisiana Tech lit prof’s fiction and poetry. Set in Los Angeles in 1979 in the aftermath of the Vietnam War as waves of Vietnamese “boat people” washed up on the U.S. Pacific coast, The Land South of the Clouds is told from the perspective of 10-year-old Long- Vanh, who bears the burden of carrying a secret entrusted to him by his mother.

Count duck decoy carving among the great Louisiana crafts. Lewis, a retired New Orleans lawyer and longtime collector, profiles more than a dozen artisans who meld the form’s exacting attributes — anatomical accuracy and a sculptor’s deft touch — into genuine art. This coffee table book features scores of photographs of decoys antique and contemporary. The works themselves belong on a mantle — not floating in a marsh near a blind.

With just enough swashbuckle to sate the casual history buff and an academic’s attention to detail, Din paints a portrait of colonial history through the rise of Sebastián Calvo de la Puerta, scion of an affluent Spanish planter family in Cuba who chose a career in the military, rose to the rank of general and served briefly as an interim governor of Louisiana (1799-1801). Through meticulous scholarship, Din extracts humanity from the central figure, who left no personal papers — or even a portrait of himself — behind.

Martha Wright Ambrose should never have been forgotten as a painter of note. Toledano and Veazey correct that injustice here with a softcover collection of the artist’s more than 50 years of painting. It’s worthy of a coffee table but will live bedside. A protege to Ambrose, Veazey discovered the trove of works in the moldering garage of Ambrose’s home after he purchased it in 2003. Most of the hundreds of paintings are watercolors — figure studies, landscapes, streetscapes of New Orleans and her travels around the globe. The book also explores Ambrose’s contemporary regional painters and in its own way paints an elegant portrait of an important artist worthy of reconsideration. 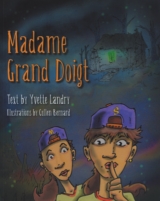 What doesn’t Yvette Landry do? Seriously. Channeling the great storytellers of Louisiana past, the Grammynominated singer-songwriter-author-cultural activist recounts the legend, passed down from a grandmother to her granddaughter, of Madame Grand Doight, a bogey-woman figure who snatches up recalcitrant children. The legend leads Marie, the main character, on an adventure with her pal Scooter that leads to “a horrifying secret.” Bernard’s lively illustrations are classic children’s book with graphic novel spirit.