It was only a matter of time before John Kennedy and Mary Landrieu crossed swords, but few guessed it would all ignite over the issues of teachers and earmarks. 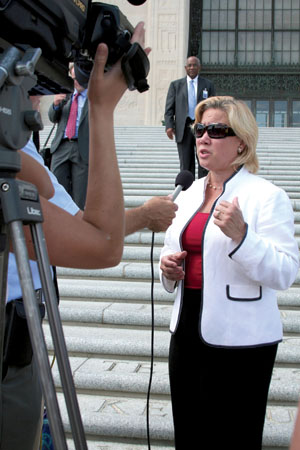 At the request of a New Orleans teacher with Democratic ties, the Louisiana Board of Ethics may be looking into whether GOP Treasurer John Kennedy is having state employees work on his campaign for the U.S. Senate, either directly or indirectly. Chris Stowe-Serge is best known in political circles for cracking the squeaky-clean veneer of Gov. Bobby Jindal by exposing his only campaign finance violation to the ethics board earlier this year, and now he’s turned his sights on Kennedy.

Stowe-Serge says Kennedy shouldn’t be pushing legislation on the treasurer’s Web site that seeks to have elected officials assist public school teachers in the classroom. He contends a state employee had to post the “campaign rhetoric on the site, through a press release,” thus doing the bidding of Kennedy’s campaign. “This has nothing to do with his job as state treasurer,” says Stowe-Serge.

The treasurer’s press release went out on April 23 in support of a bill by House Education Chair Don Trahan, a fellow Republican from Lafayette. Two days later, an e-mail blast was sent out from the campaign noting the endorsement and providing a link to the press release. “This is absolutely, positively, perfectly legal. It’s silly is what it is,” says Leonardo Alcivar, the campaign’s communications director.

True to form — and law — Ethics Administrator Richard Sherburne Jr. would not confirm if Stowe-Serge’s request (case number BD 2008-596) had been received and acted upon. Even if he wanted to do so, Sherburne is duty-bound against revealing if an ongoing investigation involved Kennedy or a state employee.

It’s another instance of the headaches press releases have caused Kennedy in his effort to gear up for incumbent U.S. Sen. Mary Landrieu, a Democrat. In March, the treasurer issued a release vigorously supporting an earmark reform bill by Republican Rep. Dan “Blade” Morrish of Jennings, which was filed for the ongoing session.

But Morrish says he alone drafted the bill and that he hadn’t heard from Kennedy the “entire session.” Still, the Louisiana chapter of Americans for Prosperity, a nonprofit group that often supports conservative causes and Republican candidates, spent $200,000 on radio ads touting Kennedy’s support for the legislation. AFP also dropped a mailer doing the same, with Kennedy’s mug near a headshot of Ronald Reagan. It’s the sort of pairing that would have sunk Kennedy’s 2004 Senate run, when he was a Democrat.

In an April interview regarding the press release, Kennedy said he was planning to testify on the bill’s behalf when it came up for committee debate. But when the legislation had its scheduled hearing last week, Morrish flew solo and complained to the committee that his bill was being politicized. It eventually failed along party lines.

Alcivar says Kennedy was in Baton Rouge for the hearing but didn’t want to impair its chances by showing up. “When you’re talking about playing politics with a good-government bill, it doesn’t make sense to further that.”

Landrieu and company spent the next 48 hours celebrating by taking jabs at Kennedy through their own press releases. “John Kennedy doesn’t even have a vote in the Legislature, and he still killed this bill,” says Landrieu campaign spokesman Scott Schneider. “He uses his office to further his political career, even at the expense of sabotaging legislation that would help put Louisiana on the path to reform.”

It was a sure sign that earmarks will be one of the battle fronts in the Landrieu/Kennedy race. Good-government groups lashed out at Landrieu this year for securing a $2 million earmark for the Voyager reading program after she received $30,000 in campaign contributions linked to company officials. Undaunted, she’s now the source of talking points that proudly promote the millions of dollars she has secured for Louisiana over the years.

It’s a fundamental debate on the good and bad that come from so-called pork-barrel spending — the ability of lawmakers to reach into a budget and mark a pot of dollars for their own district’s projects. After all, one lawmaker’s hot air balloon race is another’s drainage project. But for Alcivar, the issue is much more definitive. “Sen. Landrieu has a clear, 12-year record in staunch defense of earmarks,” he says. “We wish her good luck with that.”

For those who like the ponies, the Evans-Novak Political Report, which normally has a conservative bent, has Landrieu as an odds-on favorite to win following “another [GOP] recruitment failure.” On the other hand, Charlie Cook, a nonpartisan political handicapper, recently rated the seat as merely “lean Dem,” and a May 28 poll by Rasmussen Reports, a leading pollster, had Landrieu leading by only three points.

For now, the jury is still out on the alleged ethics investigation, and AFP has pulled its ads on Kennedy and the earmark legislation. But it’s clearly the opening salvo of this year’s highly-anticipated U.S. Senate election.