Mike Spears’ side business started out as a way to make his own pets more comfortable, but it may be poised for a luxurious takeoff. 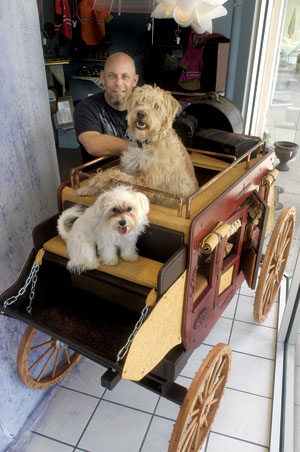 While the economy may be in the tank in some parts of the country — thankfully not here — the luxury market continues to charge full-speed ahead. It’s estimated that luxury goods and experiences spending in the United States exceeded $320 billion in 2007 and could grow even more in 2008. And if Lafayette entrepreneur Mike Spears is on target, yet a new opulence category is emerging: high-end pet goods.

Over-pampered pets are becoming big business; the market has grown by billions of dollars in the last few years — inching up to about $44 billion in 2007, according to Spears’ research. “It’s a very small percentage [of buyers] at the very high end of incomes,” he says.

There’s even a “Pet Fashion Week” in New York every fall, where models and dogs wear matching outfits.

Spears, who for the past two years has been building and marketing furniture for dogs, hopes to cash in on the trend. Initially, however, that wasn’t the motivation for the 44-year-old, who is best known as the co-founder of the local Web design and software development firm Firefly Digital. “I couldn’t find any good [pet] furniture, so I started making it,” he says. “I started creating this stuff, and I just got a little carried away.”

Just how “carried away” he’ll get depends in large part on the outcome of a meeting Spears has this week with Frontgate, the upscale catalog and online shopping company that is pushing to expand into an exclusive line of high-quality pet products. About two months ago, Frontgate found Spears’ company, Molle Tache (French for “soft spot”), online and invited him to the company headquarters in West Chester, Ohio. “They are very serious; they want samples,” Spears says. “They’ve invited me to do a presentation to their entire design team.”

Spears is a one-man Molle Tache enterprise, doing all of the design and manufacturing work himself. The craftsmanship and intricacy of the work are a testament to his devotion to his own pets (a Wheaten Terrier named Barley and Maltese named Posh) — not to mention his tendency toward the obsessive. The Stage Coach Dog Bed, for example, is designed for pets to lounge, sleep or play; it can accommodate two big dogs and up to five smaller ones. Open both sets of doors and dogs can play chase, jumping in and out of both sides. For authenticity, he incorporated luggage racks that also serve as storage space for a dog’s “clothes, beauty products, food, treats and, of course, toys,” he says. The Mercedes-Benz of his line, the Stage Coach sells for $28,500. “These things are not cheap to build,” says Spears, who spent 300 man-hours on this bed alone. “I don’t know what I’ll do next,” he says. “I don’t know if I’ll one-up that.”

Another of the pricier pieces is the $18,500 Queen’s Obsession, a four poster bed with a Swarovski crystal chandelier.

Most of the beds Spears offers are in the $1,500 to $3,500 range, and what he enjoys most is custom designing pieces that fit a home’s decor, the dog’s personality and the relationship between the pet and owner. That means he spends a considerable amount of time in the home as part of the design process. He is already in talks with a local manufacturing firm should the Frontgate deal materialize, and mass production would bring costs down significantly and within reach of much broader audience. Calling himself “the dog designer,” Spears readily acknowledges that the general marketplace may not recognize the value of this sort of luxury item, but he insists the sky is the limit when it comes to man’s best friend. “Animal lovers are always seeking ways to please their pets,” he says.