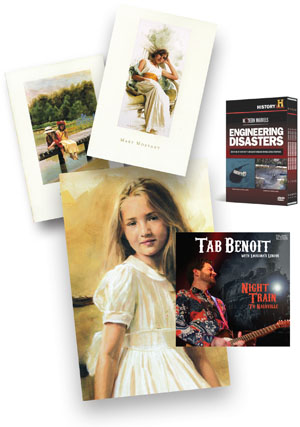 PICTURE PERFECT
We’re a century too late to have our family portraits painted by John Singer Sargent, but Lafayette artist Mary Morvant is giving the grand master a run for his money. She has the rare ability of catching not only likeness but inner light, the soul made visible. Her portraits pay homage to American Impressionism with its gorgeous atmospherics illuminating a figure in harmony with nature and at peace with herself. Morvant studied art and architecture at Louisiana Tech University before continuing her training a the Atlanta School of Art. She now resides in Lafayette. Portrait prices range from a head-and- shoulders rendition for $7,500 to full length paintings at $14,000. For more information call 278-8963. — Mary Tutwiler

INFAMOUS REVIEW
The History Channel series Modern Marvels typically focuses on grand architectural and design achievements. That’s not the case with its most recently released DVD box set, Modern Marvels: Engineering Disasters. Unfortunately, south Louisiana features prominently, with segments on the 1980 maelstrom at Lake Peigneur on Jefferson Island and the 1996 Bright Field incident in New Orleans running alongside features on the Exxon Valdez oil spill and the collapse of the 7 World Trade Center building. Another 45-minute episode is devoted entirely to New Orleans’ infrastructure failures in the wake of Hurricane Katrina. The episodes include animation, interviews with eye witnesses and scientists, as well as archival footage of the disasters themselves. The five-disc, 18-episode box set sells for $49.95 and is available through the history channel’s Web site at www.history.com/minisites/modernmarvels. — Nathan Stubbs
**
BENOIT’S BAYOU TRAIN**
Louisiana musicians have contributed to numerous hurricane-related benefits and recorded Rita and Katrina-related songs, but Houma bluesman Tab Benoit was sounding the call before the 2005 storms. Benoit’s the president of Voices of the Wetlands, the nonprofit 501(c)3 and all-star music collective dedicated to drawing attention to coastal land loss. (Benoit was also one of the main subjects of Hurricane on the Bayou, the IMAX documentary that wrapped primary filming pre-Katrina.) Benoit’s new live album, Night Train to Nashville, finds the guitarslinger backed by Louisiana’s LeRoux and joined by special guests Waylon Thibodeaux on fiddler and washboard and Kim Wilson and Johnny Sansone on harp and vocals. From the stripped-down “Fever on the Bayou” to the greasy syncopation of “Moon Comin’ Over the Hill” and the stone blues of the closer “Stackolina,” Benoit keeps the spotlight on south Louisiana with some superb homegrown grooves. Night Train to Nashville retails for $17.98 and is available locally at Barnes & Noble, Best Buy and Circuit City. — Scott Jordan