An unseen killer stalks residents of the Northeast in the sporadically creepy The Happening. 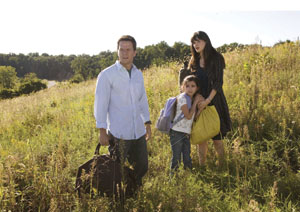 Something wicked this way comes, and it’s borne on the back of the invisible wind.

Two friends sit in the world’s most famous urban green space — Central Park — reading and enjoying a breezy afternoon in the sun. One can’t remember where she should pick up reading her mystery thriller. Her friend reminds her which part of the story she had reached, then turns her head as she hears a scream. All seems normal: joggers and walkers mingle on the paved path, dogs walk, kids play. But then everything stops, frozen by some unseen hand. A man begins to walk backward. She turns to her friend, who’s tonelessly repeated a phrase from her earlier inquiry and is now reaching up to free one of the smooth round sticks holding her blonde hair in place. Emotionless, methodical, she jabs the hair-holder into her own jugular vein.

Across town, a small klatch of construction workers stands on the street, one sharing the punchline of a bawdy joke. Suddenly, shockingly, his coworkers begin throwing themselves from the top floors of the building, one after the other limply free-falling to the sidewalks below.

New York City is under attack.

Slightly more than 90 miles away, in Philadelphia, high-school science teacher Elliot Moore (Mark Wahlberg) talks to his class about inexplicable acts of nature, things like the recent disappearance of honeybees that we may never understand enough to be able to explain. The idea being that even the most rigorous scientific inquiry can pale in the face of the complex interrelations of our cosmos. Class is interrupted by news of what is being classified as the “terrorist strike” in New York, an airborne toxin being everyone’s best guess; students are sent home as a precaution. Elliot and his math teacher friend Julian (John Leguizamo) decide to grab their families and head to Julian’s mother’s house in Harrisburg, outside the major metropolitan area, just to be on the safe side. Julian picks up his daughter Jess (Ashlyn Sanchez); his wife will follow on a later train. Elliot’s waify wife Alma (Zooey Deschanel) goes ahead with the guys.

On the packed train, the friends begin to hear incoming reports of incidents in their own Philadelphia and also in Boston. Julian desperately texts his wife, who didn’t make the later train but found a seat on a bus to Princeton instead. The refugees are convinced they are headed in the right direction, until suddenly the train stops in the tiny town of Filbert. The conductors announce that this is the end of the line; one tells Elliot quietly that they have lost contact with the outside world. Still, no one really panics until, inside the burg’s now-bustling diner, a news report shows a map detailing incidents up and down the Northeast and announces that the government now thinks it is too widespread to be a terrorist attack. Everyone, it seems, has been pointing the finger at the wrong kind of desperate killer. This is something bigger, something badder. This is The Happening.

Writer, producer, director M. Night Shyamalan made his name with surprises, the sneaky surprise-ending symmetries of movies like The Sixth Sense, Unbreakable and The Village occasionally giving way to more mythopoetic narratives like Signs and Lady in the Water. Among his always-innovative-if-not-always-successful filmography, The Happening’s closest kin is the underappreciated Signs, another message-driven movie peppered with gotcha scares that strives to evoke an uneasy mood. What’s happening in The Happening is revealed early on, a move that might catch some movie fans offguard, but which frees Shyamalan to explore a few creative rabbit trails that make up the movie’s best moments. Because he’s not safeguarding some kind of eleventh-hour reveal but instead carefully crafting an aura of eerie, we get an unsettling encounter with the downright Gothic hermitess Mrs. Jones (Betty Buckley) in the Pennsylvania countryside and the film’s most poignant moment in the till-now strained marriage of Elliot and Alma. Shyamalan’s movie meanders like his protagonists: restless, jumpy, taking indirect routes, stopping and starting.

But like its protagonists, it is not wholly successful in avoiding disaster. A chunk of act three seems to be missing, a time shift abruptly interrupting the film’s flow. The acting is hit or miss; Leguizamo is promising, but his story line takes him from view far too soon. Wahlberg is winning in some scenes, affectedly naive in others. Deschanel seems to be struggling to keep a straight face for the first half of the movie; like the gathering storm, though, she gathers steam toward the end.

The Happening is not an event. It’s a mildly interesting summer movie with at least three truly fantastic moments and an imaginative if under-explored premise. Shyamalan still doesn’t make movies like anyone else, even when he’s not quite in control of The Happening he helms.