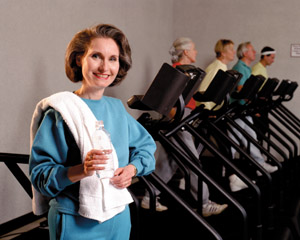 Summertime is just starting, and people are already dreading the thought of spending endless hours sweating to fit into those scanty hot weather outfits. But a new study by a Pennington Biomedical Research Center scientist shows that even minimal exercise ' including walking or riding a stationary bike at low resistance ' leads to significant health benefits for post-menopausal women. These benefits could apply to the rest of the population as well.

Pennington released the surprising results in the Journal of the American Medical Association on May 15. After six years of exhaustive studies, the research team, led by Timothy Church, Ph.D., director of Pennington's preventative medicine research laboratory, found that post-menopausal women who exercised as little as 15 minutes a day, five days a week, improved fitness levels.

The study followed 464 women from the Dallas, Texas, area who were randomly divided into four groups: a control group that did not exercise, and three other groups that exercised for 71 minutes, 150 minutes, or 225 minutes per week. These categories were based on the surgeon general's recommendation of 150 minutes of weekly physical activity, reduced by one half and increased by one and a half times. To qualify, participants had to be post-menopausal (average age 57), sedentary, hypertensive, and overweight with a body mass index range of 25 to 43. "It was probably the largest exercise trial ever conducted in post-menopausal women, and it may be the largest trial ever conducted in women for exercise," Church says.

Researchers started with a simple known concept ' as people age, they lose 1 to 2 percent of their fitness per year. "Fitness" is how much work a person can do, demonstrated by how quickly someone becomes winded through exertion, such as climbing a flight of stairs. Church's team wanted to pin down the minimum dose of exercise that would be required to either stop or prevent fitness loss. "Low fitness or being unfit is a very strong predictor of dying prematurely, particularly from cardiovascular disease," Church explains. "And, as we know, cardiovascular disease is the No. 1 killer of women, and there are not a lot of strategies out there to reduce that risk."

During the study, participants walked on treadmills or rode stationary bikes under supervision. At the end, researchers measured fitness by having the women undergo a maximal exercise test on a stationary exercise bike while gradually increasing resistance. Predictably, the results showed that the more exercise the subjects had done, the greater their level of fitness. But what shocked scientists was that the women who had done the bare minimum of 71 minutes a week had gained fitness as well. "The big surprise, and why the studies got so much notoriety, was because those who were in the 71 minutes per week group not only reversed the loss of fitness, but actually gained about four percent of fitness," Church says. "That was kind of surprising, because it breaks down to about 10 minutes a day. And, they were walking on a treadmill or working out on a stationary bike at very, very low intensity. So, the fact that 71 minutes a week at low intensity increased fitness is an important deal."

Church says that the form of exercise really does not matter. "Physical activity is physical activity ' it could be walking the dog, swimming, chasing the kids," he confirms.

Locally, walking is the most popular exercise, according to Buddy LeBas, manager at Red Lerille's. For health benefits, he suggests aiming for 30 minutes a day, three days a week. To be physically fit, exercisers should shoot for 45 to 60 minutes a day at least three times a week, with half of that time spent on aerobic activity. "'Physically' fit means that you should be in the top 25 percent of your age bracket as far as physical activity," LeBas explains. "That means that in any nationally standardized fitness test, such as for walking, running, stress tests, etc., you should be in the top 25 percent for your age group."

To get maximum benefits from walking, LeBas recommends exercising at a brisk pace. The goal is to pass the "talk test," meaning that you should be slightly out of breath while having a conversation with your walking pal. Once you get up to four miles per hour, your fitness level increases. "To be fit, you should aim for 60 percent of your maximum fitness level, three days a week," he says.

Church agrees with the surgeon general's recommendation of 150 minutes per week, which breaks down to 30 minutes a day, five days a week. For people unable to commit to that amount of time, he says something is better than nothing. "What our findings mean is that for those people who can't get the 150 minutes because they are older and have functional limitations, or they are very sedentary, and are just not ready to do 150 minutes, these studies suggest that even as little as half of the recommendation has benefit. It means that people are getting benefit as they are working their way up ' it's not an all or nothing thing."

Church's team plans to extend the research to find out whether it extends beyond post-menopausal women. "We are interested in doing some different spins on the study, looking at the role of resistance training or weight lifting, seeing if this works in men, and seeing what happens if we use higher intensity training, rather than the lower intensity training that we did," he says. "Hopefully, we'll be seeing these studies for the next three or four years."