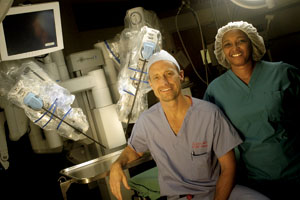 Edith Melancon was facing a dilemma. When the 85-year-old started having shortness of breath and pain, her cardiologist, Dr. Mike Mounir, took an ultrasound and discovered that she had two leaking heart valves. She'd had open heart surgery back in 1994, but this was no longer an option at her age. So, Mounir referred her to Dr. Bruce Jones, an innovative cardiovascular/thoracic surgeon who had just relocated to Lafayette from South Carolina. Jones is renowned as an expert in groundbreaking, minimally invasive techniques, having performed and instructed more than 200 cases using small incisions in the chest, rather than cracking the sternum.

On Oct. 19, Jones used the da Vinci robot to perform mitral valve surgery on Melancon at Lafayette General Medical Center. A week later, Melancon was up and around, then released from the hospital. This was a significant change from her first cardiac surgery, where her recovery took about a month. "We wanted to avoid going through her breastbone because of her prior surgery, because of the scar and adhesions," Jones says. "And, that's big stress on anybody, much less an 85-year-old. So, we were able to go through the side of her chest, and she did really well. With the other surgery, her recovery would have been much more severe, much harder."

Today, Melancon is doing just fine. "I feel better," she says in her Cajun accent. "Before the surgery, I was hurting, and I'm not hurting anymore."

Jones performs two closed-chest valve procedures which are new to this area. The first is aortic valve surgery through a small incision in the upper chest. Most heart surgery is performed through sternotomy, which involves dividing or cracking the breastbone. Jones' technique uses small, 5-centimeter incisions through the chest to reach the aortic valve. Since moving to Lafayette two months ago, Jones has performed six aortic valve replacements using this technique.

The other minimally invasive procedure is the one he performed on Melancon, mitral valve surgery with the da Vinci robot. Jones was the first surgeon in the state to use the robot for cardiac procedures and has the most experience with a variety of robotic heart procedures nationwide. With this technique, the surgeon places instruments into the patient's chest through small "poke holes." At a console, the doctor uses two "joy sticks" to operate the arms of the robot, which are actually inside the heart. The instruments have two small hinge points, allowing the surgeon to move the instruments with a wrist-like motion to do whatever is necessary ' dissect, cut, sew ' to repair or reconstruct the valve.

While this all sounds like science fiction, Jones says this technique is perfectly safe. Since the da Vinci uses a state-of-the-art camera in 3-D and high definition, the surgeon's vision is much better with the console. "You just have finer details when you are operating with the robot, as opposed to the standard way," he says.

Most significantly, the recovery time is drastically reduced. "We are not breaking or cutting any bones," Jones says, "so patients really can get back to work in two or three weeks, as opposed to eight weeks."

After surgery, patients' limitations are what he calls "miniscule." Within a week, they have few, if any, physical restrictions. Jones cites the example of a 79-year-old Nebraska farmer who was hauling 25-pound buckets of feed to his cattle just 10 days post-surgery. "You just can't do that if you have the sternotomy," he says. "We've shown that the recovery time in the hospital is quicker as well. We've had people go home on post-operative day number two and post-operative day number three, as opposed to being in the hospital four or five days."

Additionally, the resulting scar is minimal. Open-chest procedures typically leave an 8- to 10-inch gash down the center of the torso, while closed-chest surgeries produce just a slight incision mark. In Melancon's case, she was left with small scars under her right arm and on her breast.

While robotic mitral valve surgery is relatively new ' the first case was performed in May 2007 ' the reports are encouraging so far. "We've had anecdotal results and five-year results," Jones says, "and those results, to date, are very, very positive, and show just as good a result as surgery done the old-fashioned way."

Another advantage is that just about anyone with isolated valve problems is a candidate for the surgery. Jones has used the robot on three morbidly obese women in Nebraska and performed the closed-chest valve procedure on a 400-pound man in South Carolina. "I think anyone who needs mitral valve surgery should at least be evaluated for a minimally invasive approach," he says. Currently, Jones performs 14 different cardiac procedures with the da Vinci. In fact, he did the first robotic tricuspid valve repair in the country. The tricuspid valve is located between the right atrium (top chamber) and right ventricle (bottom chamber). Its role is to make sure blood flows in a forward direction from the right atrium to the ventricle, but if it does not function properly, blood can leak backwards across the valve.

Jones is optimistic about the future of robotics, anticipating that they will expand to lung surgery. "I think the techniques will get better, and the software, the robot and the computer will get better," he says. "It will just become more of a standard of care. Five years or 10 years from now, the technology is only going to get better. The number of programs offered for robotic cardiac surgery is expanding. So, it's a technique that people need to know. [Patients] need to look at the Internet, and see what's out there for options. Because not all facilities offer this, and probably not all cardiologists are going to offer this. And patients need to know that it is available for them, and to ask for it."

Word of mouth might be the best way to educate the public, as patients like Melancon aren't shy about talking up the procedure. "Because it works ' it works good," she says emphatically.