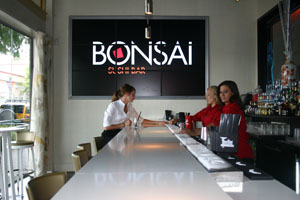 The doors of downtown’s second sushi restaurant, Bonsai, opened quietly last Monday, but by Saturday night techno rhythms were pulsing and the sleek new bar was jammed with curious customers. Owner Paul Le opened the original Bonsai in the Ambassador Row shopping center in 2000. He moved to River Market Place, at the intersection of Ambassador Caffery and Kaliste Saloom several years later. That Bonsai remains open on the southside. Le says he is bringing an upscale concept and an entertainment destination to Jefferson Street with his new restaurant, just two doors down from Tsunami. “We felt we were ready to show Lafayette what we are all about,” he says.

There’s a lot to see. The black and white bar up front tracks the curved glass wall that is the restaurant’s facade on the corner of Jefferson and Garfield. Behind the bar, an intimate dining room with small booths, glass and bamboo room dividers, and subtile lighting welcomes customers. Bonsai is known for jazzing up traditional rolls with Cajun spice --fusion sushi, Le calls it. What’s new at the bar is fruit-infused saki, shaken over ice to create frosty summer sakitinis, and a mojito sweetened with fresh squeezed sugar cane juice.

Bonsai has been a long time coming. Le described an October 2007 opening to the Independent last year. Since then banners have been announcing the eminent opening for  months. The restaurant is open Monday through Saturday, 5-10 p.m., for dinner only, but the bar starts getting cranked up at a much earlier early 3 p.m and keeps on going till the wee hours.