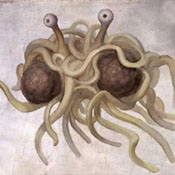 Where is the Flying Spaghetti Monster when you need him? Will he outstretch his noodly appendage and touch Louisiana?

While we wait patiently for his appearance, the backlash over the "Louisiana Science Education Act" has begun, as we predicted last week, and The New York Times has denounced it in an editorial on Saturday, titled "Louisiana's Latest Assault on Darwin," the paper concludes:

As a biology major at Brown University, Mr. Jindal must know that evolution is the unchallenged central organizing principle for modern biology. As a rising star on the conservative right, mentioned as a possible running mate for John McCain, Mr. Jindal may have more than science on his mind. In a television interview, he seemed to say that local school boards should decide what is taught and that it would be wrong to teach only evolution or only intelligent design.

If Mr. Jindal has the interests of students at heart, the sensible thing is to veto this Trojan horse legislation.
On Friday, the American Association for the Advancement of Science's CEO and the publisher of Science magazine Alan I. Leshner wrote another letter to Gov. Jindal urging him to veto Senate Bill 733.
The bill disingenuously implies that particular theories, including evolution, are controversial among scientists. ... In short, there is virtually no controversy about evolution among researchers, many of whom, like you, are deeply religious.

What about intelligent design, which you addressed in your recent interview? Because it is not science, but a concept based on a religious belief, intelligent design might be an appropriate topic for a course on philosophy or world religions. But it has no place in a science classroom. From a scientific perspective, there is simply no way to test for the presence or absence of God or another "designer." From a legal perspective, intelligent design comes from a single religious point of view, and a federal judge appropriately ruled that teaching it in science class is unconstitutional.

In 1987, the U.S. Supreme Court declared unconstitutional a Louisiana "creation science" law. Rather than step backward, look to the future by seeking to provide Louisiana students with a firm understanding of evolution and other essential scientific concepts so they can compete for high-skill jobs in an increasingly high-tech world economy. Asserting that there are controversies about these concepts among scientists—when in fact there are not—will only confuse students, not enlighten them. I urge you to protect the future of science education in your state by rejecting this bill.
Read the first letter from Leshner, and watch Gov. Bobby Jindal refer to intelligent design as science in an interview with Face the Nation.