The drop in breast cancer rates is linked to decreased use of hormone replacement therapy. 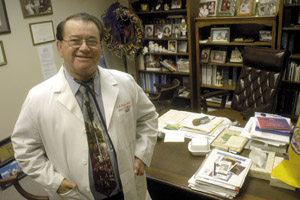 For years, questions have lingered about the long-term effects of hormone replacement therapy. But now that studies appear to clearly link the drop in new breast cancer rates to women's decreased use of HRT, the wonder has turned to worry for those who used the therapy for years and especially for the group still taking hormones. In a New England Journal of Medicine report released April 19, researchers revealed that national breast cancer rates fell almost 9 percent between 2001 and 2004.

In the past, women commonly used hormones to decrease menopausal symptoms such as hot flashes and mood swings, as well as to prevent more serious conditions including osteoporosis, strokes and heart attacks. That all changed following a Women's Health Initiative study in July 2002 showing an increased risk of breast cancer, cardiovascular events, and urinary incontinence in women using HRT. After the WHI report, postmenopausal patients stopped taking hormones in droves, drastically reducing prescriptions for popular therapies Premarin and Prempro from 61 million in 2001 to 21 million in 2004, with the largest drop from 2002 to 2003. Not coincidentally, say researchers, the overall incidence of breast cancer fell 7.2 percent in 2003. About 200,000 cases of breast cancer had been expected that year; the drop meant that about 14,000 fewer women actually were diagnosed with the disease, according to a December report by the National Cancer Institute.

Some were skeptical when that report tied the drop to hormone use. But the April numbers, which add 2004, prove this was no fluke because the numbers did not jump back up. At this point, they seem to have stabilized.

Senior investigator Donald Berry, Ph.D., of the world-renowned University of Texas M.D. Anderson Cancer Center in Houston, and his research team discovered that the breast cancer decrease started in mid-2002, almost as soon as women jumped off the therapy, and occurred only in women over age 50. As more women abandoned the therapy, the rates continued to fall in 2003. From 2001 to 2002, breast cancer incidence dropped from 138 to 135 cases per 100,000 women, and in 2003, it dipped to 126 cases per 100,000 females. For women with the most common form of the disease ' estrogen receptor positive (tumors that need estrogen for growth) ' cases fell almost 15 percent among women ages 50 to 69. While scientists considered other scenarios for this decline in new breast cancer cases, including changes in reproductive factors, mammography rates, diet alterations, and environmental issues, they concluded that HRT was the most likely culprit.

Experts point out that these studies do not prove a definitive link between HRT and breast cancer as they are based only on population statistics. To prove causation, scientists must conduct a randomized clinical trial. Subjects in the WHI study, which first confirmed the link, are still being monitored. Later this year, WHI researchers anticipate releasing a follow-up report.

In the meantime, this study will undoubtedly have an impact on how women feel about HRT. Currently, breast cancer is the most frequently diagnosed cancer among American women and the second leading cause of cancer deaths in females. Nationwide, about 180,000 new cases are expected to occur in 2007. Worldwide, that figure jumps to almost 1 million.

According to the American Cancer Society, an estimated 3,262 Louisiana women will be diagnosed with breast cancer this year. Of these, 137 cases are expected to occur in Lafayette. The projected 2007 death rate from this cancer is 699 for women statewide and 29 in Lafayette.

But while these daunting statistics alone may be enough to tempt local women to dump their hormone pills into the nearest trash can, that might not necessarily be a good idea. Meza says that HRT is still a viable option for some patients but must be determined on a case-by-case basis. "It's a tricky business," he says. "What I'm doing with my own patients is I am trying to find the reason why women are taking HRT. I want to know exactly the reason ' for instance, if a patient is feeling extremely miserable, and is ready to start World War III, having some severe psychological problems, or the hot flashes are intolerable. Then, I have to spell it out for her ' 'Look, you know, the incidence of breast cancer is increased with HRT.'"

For patients who want to continue with hormone therapy, Meza recommends close monitoring through diagnostic testing, including mammograms, ultrasounds and even MRIs. "HRT is a very, very controversial issue, and I like to negotiate with my patient and make sure that she understands the risks and that she has to be under constant observation," he explains. "But, I try not to encourage, too much, the usage of hormones because it definitely increases the incidence of breast cancer."

Luckily, alternatives to HRT do exist for menopausal and post-menopausal women. Meza prefers to treat symptoms individually. For example, he says that several medications are available for treating hot flashes and osteoporosis. He suggests diet and exercise for prevention of cardiovascular disorders. "It just depends on what you are looking at as an alternative for estrogen," he says. "But, you have to take the medications on an individual basis."