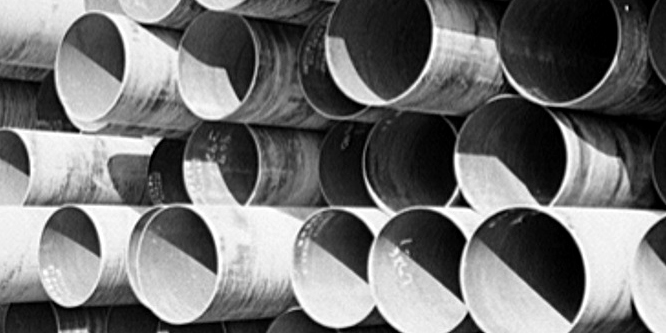 Down Louisiana 3066 and the Lower Grand River, past the middle of swampy nowhere, rests a cypress marsh hamlet of oyster shell roads, elevated houses, above-ground swimming pools and all manner of flat-bottom boats.

This is where the geography maze of the Atchafalaya Basin unfolds in a breathtaking flat canvas of forest, wetlands and pockets of semi-navigable water.

There's another maze here, too: one of pipeline canals etched through the basin by oil and gas companies that employ more than 64,000 people in Louisiana. They carry the state's most lucrative natural resources from the ground to refineries and petrochemical plants across the Gulf Coast.

Since oil was discovered in Louisiana in 1902, there's been a steady tension between those who make their livelihood fishing, trapping and hunting, and those who make money by extricating the crude oil and gas created millions of years ago from the fossilized remains of marine organisms.

Against this backdrop comes a company that wants to build the Bayou Bridge Pipeline, a controversial $670 million project that would run 162 miles through the Atchafalaya Basin and across 11 parishes. It would link a major oil-and-gas hub in Texas with refineries in Louisiana and along the coast.

"It's the safest and most economical way to transport crude," said Gifford Briggs, vice president of the Louisiana Oil and Gas Association. "People should be celebrating this project."

Opponents, emboldened by protests over the Keystone XL and Dakota Access pipelines, are trying to block it. They say oil and gas infrastructure alters drainage and water flow, erodes the land and increases flood risks. It's one of several reasons that south Louisiana is disappearing into the Gulf of Mexico.

"We need to get out of the fossil fuel business," said Anne Rolfes, founding director of the Louisiana Bucket Brigade, a New Orleans-based environmental health and justice organization. "We need to stop building pipelines. It's causing catastrophic problems to our environment."

Those who live in Bayou Sorrel do so for pretty much one reason: to carve out a living off the land. Many of these people worry the Bayou Bridge Pipeline will further damage their hunting and fishing grounds. They fear for their economic future.

What's undeniable is that this state and its government are economically powered by the oil and gas industry.

According to a 2014 report by LSU economist Loren Scott, the Louisiana Mid-Continent Oil and Gas Association and Grow Louisiana Coalition, the industry was responsible for 64,669 direct jobs (287,000 including related work), $20.5 billion in household earnings and almost $74 billion in sales to Louisiana companies in 2011.

"It is the engine that makes the difference," Scott said. "The energy industry, and its accompanying multiplier effects, has been a powerful engine for economic growth in Louisiana."

Critics say the industry historically does not live up to its "safe operations" promises, that Louisiana does a poor job enforcing its own regulations and that the U.S. in general needs to get out of the fossil fuel business because of its damage to the environment.

Two government permits are needed for the pipeline, from the U.S. Army Corps of Engineers and from the Louisiana Department of Natural Resources.

That there is protest at all is a bit surprising. Typically a Louisiana pipeline project, even one as large as this, would sail through the regulatory process. 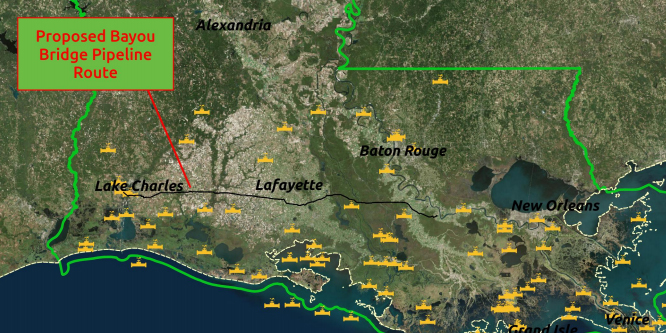 But the protesters were inspired in 2015 when President Barack Obama rejected the proposed 1,179-mile Keystone XL pipeline that would carry oil from Canada to the Gulf Coast. More encouragement came in 2016 when protesters and a Native American tribe persuaded the Corps of Engineers to consider an alternate route for the 1,172-mile Dakota Access Pipeline, a $3.9 billion project to move oil from North Dakota to an oil hub in Texas.

Those victories have been short-lived. President Donald Trump, in his first week in office, reversed Obama's decision on Keystone and signed a document clearing the way for government approval of Dakota Access.

The company building the Dakota Access Pipeline, Energy Transfer Partners, is also involved with the Bayou Bridge project. It's in a joint venture with subsidiaries of Phillips 66 and Sunoco Logistics.

In fact, the two projects are linked: The Dakota pipeline would carry crude from North Dakota to a site near Nederland, Texas, then a recently completed pipeline built by the same group would transport it to Lake Charles to connect with the Bayou Bridge Pipeline.

The 24-inch diameter pipeline would cross eight Louisiana watersheds, according to public records. In the Atchafalaya Basin, 77 acres of wetlands would be permanently altered, and 171 acres of wetlands temporarily affected by construction.

That concerns Jody Meche, a commercial crawfisherman from Henderson. He said he's not necessarily opposed to the pipeline but worries it will hinder water flow.

"My business has been hurt over the past decade," he said. "I don't want it to get any worse."

Bayou Bridge's backers say they are "committed to restoring 100% of any affected area — at the company's own expense — if there are any impacts from construction or during long-term operations."

Such promises ring hollow for Rolfes, of the Louisiana Bucket Brigade. "The evidence is clear these companies say whatever they need to in order to get a permit and then refuse to take responsibility for the damage they cause after the fact."

Russel Honore, a retired U.S. Army general from Louisiana and leader of the Green Army coalition of environmental groups, argues the underlying problem is that Louisiana lacks the regulations or the enforcement capabilities to hold oil and gas companies responsible for inspecting and maintaining pipelines.

There's no dispute that significant damage has been done to the Atchafalaya Basin over the past century, not only by the oil and gas industry but also by the mass cutting of cypress trees and the clearing of wetlands for agriculture. The effect has been significant not only in the basin downstream, because the erosion of marshes has led to the loss of coastal lands to the Gulf of Mexico.

Industry representatives say they do a better job now. "The way pipelines are built today is far safer and involves much more technology and testing than in the past," Briggs said. "Is anything 100 percent certain? No, but the pipeline will be built and operated in the safest way possible."

If it does come to pass, everybody in the Atchafalaya Basin hopes he's right.

"I've seen the damage caused by doing it wrong," said Rusty Comeaux, a Lafayette native who works in the oil fields and regularly hunts and fishes the Atchafalaya.

"The state, or whoever, needs to stay on top of these people and make sure everything they're supposed to do actually gets done."