Greyhound’s future is on hold as Lafayette Consolidated Government moves to put the brakes on the station’s relocation to Moss Street. 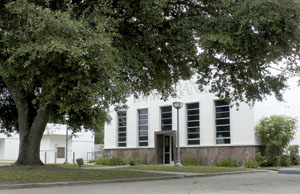 Despite more than a year’s worth of negotiations to try and find a new home, Greyhound buses are still pulling into the same Lee Avenue station the company has been operating out of since the 1950s. The company had hoped to leave the aging facility and recently reached an agreement to sell the building.

Greyhound has a deal in principle with Right Road Christian Center, a nondenominational church located on South Buchanan Street. Doug Perroncel, the church’s minister, says Right Road planned to renovate and move into the Lee Street building this year. The church, whose ministry places an emphasis on outreach to the homeless and people struggling with drug addictions, has been looking for a bigger presence downtown. Now, Perroncel says, it’s all up in the air because of the city’s decision.

“How can anybody do anything?” he asks. “It’s a sad day for Lafayette when you go get a permit and you can’t move in. What if it was you or me?”

Perroncel is referring to the City-parish Council’s action last week to try to block Greyhound from moving its station to a new location on Moss Street. The council voted 6-3 in favor of an ordinance rescinding a zoning change necessary for Greyhound’s move. Councilman Kenneth Boudreaux spearheaded the effort, based on his constituents’ opposition to having Greyhound locate within the residential neighborhood. (Greyhound has cited the property’s proximity to the interstate as one of its assets.)

The city is now expected to send out notice to Greyhound that its temporary Certificate of Occupancy for the Moss Street building is being revoked. If the company continues renovations at the site, Boudreaux will recommend the city seek a cease and desist order against Greyhound.

Last week, Greyhound spokesman Dustin Clark told The Independent Weekly that company officials learned about the council vote from local newspaper reports but were not informed of the meeting ahead of time. “We haven’t heard from anyone from the city,” Clark says. “We plan on moving forward with our renovations at the Moss Street location until we’re told not to legally.” Clark doesn’t know if that would require a cease and desist order signed by a judge. “It’s not a clear situation right now,” he says. “There seems to be a lot of ambiguity legally in the situation and in the vote.”

Several legal questions arose at last week’s council meeting. Councilman Bruce Conque questioned whether the council’s action would have any teeth, since Greyhound had already obtained building permits and a temporary Certificate of Occupancy under the light industrial zoning classification. He asserted Greyhound may already be legally grandfathered in for that zoning classification. Conque was one of three councilman — including William Theriot and Jared Bellard — who voted against the ordinance to revoke Greyhound’s zoning.

The council’s vote last week repealed the previous city-parish council’s October decision to grant Greyhound’s request that the property be re-zoned from general business to light industrial. Greyhound bought the Moss Street building from IberiaBank contingent upon the zoning change.

The three dissenting councilmen expressed concern that the council was sending the wrong message to the business community. “IberiaBank followed all of the required actions to complete the sale of the property to Greyhound,” says Beth Ardoin, director of communications for IberiaBank, in an e-mailed statement. “At the time of the sale, the community surrounding the property did not express concerns. In fact, no residents spoke out at the Planning and Zoning meeting or responded to the registered letters sent out by the Planning and Zoning Commission outlining the zoning changes.”

In obtaining the industrial zoning for the Moss Street site, Greyhound agreed to stipulations including a sound buffer and another provision that stated if Greyhound ever left the property, it would revert to a general business zoning classification.

At last week’s council meeting, a large number of area residents showed up to voice opposition to Greyhound’s move to the Moss Street site, which sits in a residential area near two schools. Councilman Boudreaux believes the council’s recent decision will hold up in court since Greyhound has yet to begin operating its bus station on Moss Street. He also laments not bringing the issue up sooner; Boudreaux twice delayed a vote on the measure to allow more time for city officials and Greyhound representatives to broker a deal bringing Greyhound into the city’s proposed multi-modal center. During that time, Greyhound went ahead with obtaining permits and a temporary certificate of occupancy for the Moss Street property. “I could have taken action six weeks ago, and I chose not to,” Boudreaux says. “I deferred to show good faith negotiations, and when [Greyhound’s] turn was there to either move forward or show good faith, they chose to move forward.”

Boudreaux still holds out hope that an agreeable solution can be reached. “Once they see the effort that was put forth at the council meeting and again reminding them of wanting to be a good, friendly community neighbor, their representative may want to come back to the negotiating table and work something out.

“This is not about being anti-business,” Boudreaux continues. “This is just about being pro-people. And Greyhound is still welcome to join us in the multi-modal facility.”