How two Lafayette women are working to raise awareness of organ donation. 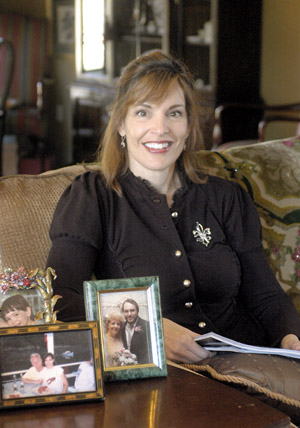 Nationwide, about 95,000 people are on the waiting list to receive an organ donation. In Louisiana, 1,580 individuals are in that number, and the majority ' 1,334, to be exact ' are counting on a viable kidney.

Lafayette native Janie Campbell knows just how a kidney can be so precious. Her younger brother, David Dugas, was diagnosed with juvenile diabetes at the age of 7. While Janie was always healthy, her sibling was constantly battling illness. She prayed constantly for his recovery, but by the time he reached his 20s, David's kidneys started failing, and Janie realized that she might have to take a more active role to save his life. "That was the first time I started thinking, 'They might ask me to give him a kidney,'" she recalls.

Janie went to see him in Memphis, where David's thoughts turned to his wife. "He said, 'You know, my poor wife. How can I be a good husband to her? I'm always sick,'" Janie remembers. "And it just broke my heart. So, I thought, 'I'm just going to do it.'"

Six months later, the siblings underwent four days of extensive testing and were cleared for the donation process. They had to wait another three months to undergo the procedure. After the surgery, Campbell remained in the hospital for four days, then stayed at the hotel adjacent to the transplant center for another couple of days. She recovered at home for about six weeks, then returned to her work as a tutor. "The surgery wasn't bad," she says. "It felt like a bad stitch in my side. And the euphoria of knowing how it all went kind of helped. My brother was so excited. Everyone was."

For David, the recuperation process was difficult. Post-surgery, he was on dialysis. He had a rejection episode about six months later but eventually recovered and is now six years post-transplant. "He is doing very well," Campbell reports. "He is not able to work, because of all the damage that had been done to his organs. But, he cooks, cleans, and he is remodeling his house. He's very happy. If it weren't for the transplants, I don't know how long he would have lasted."

About three years later, Campbell felt a strong need to tell people about the importance of organ donation. A friend recommended that she contact the Louisiana Organ Procurement Agency's outreach person, Libbie Harrison, to volunteer. When she called, Campbell told Harrison about her experience, and recounted a story about a local couple who had donated their teenager's organs after he died in truck accident.

Harrison calmly responded, "That was my son."

Harrison, LOPA's family advocate and community educator, started volunteering after two tragic experiences. The first occurred in 1994, when her father was diagnosed with congestive heart failure. At that time, the only solution was a transplant. After two years of waiting for a heart, Harrison's father died. "We were so angry that Daddy died," Harrison recalls. "We thought that you really had to be rich and famous to get a transplant."

At that point, Harrison's 15-year-old son, Justin, decided to scour the Internet for information on organ donation. Afterwards, he gathered his parents and four siblings together and encouraged them to express their wishes about donation. "We all agreed that it was the right thing to do," Harrison says.

Eleven months to the day after his grandfather's funeral, Justin fell from the back of a stationary pickup truck and struck his head. As the family waited anxiously at the hospital for word of his condition, Harrison says she was on her knees "begging, pleading, and making deals with God."

Justin was declared brain dead. "At first, I totally did not understand brain death, because he was still hooked up to the machine, so his body was still functioning," Harrison recalls. "So, that didn't look like death to me. And again, I prayed some more, and begged some more, and wanted to take him home. And at some point, I realized he was home, but he wasn't going to be with me."

Once Harrison reached that realization, she started asking questions about organ donation. Her biggest fear was that Justin would be disfigured by the process, but LOPA's representative reassured her that would not happen. "She assured me that it would not affect the viewing at the funeral," Harrison says. "It would, however, delay the funeral, perhaps even a day, because it does take some time to find all of the perfect matches."

Justin's organs saved five lives and gave sight to two others. Harrison has maintained contact with the recipients of his heart, pancreas and left kidney, and recently heard from his right kidney donee. "Something really good happened that day, too," Harrison said. "Because, if we would have said no, we wouldn't have Justin, and these folks would have died also."

Harrison started volunteering at LOPA nine years ago and became a full-time employee in 2000. Louisiana has 1.5 million registered donors, and more than 100 new donors sign up each year. "Our outreach efforts are working, and we are saving more lives than we ever have," she says. "What Justin said is right, because after Daddy died, and after Justin did all of that research, he said, 'Mama, if more people knew about donation, Paw Paw would still be alive. We are going to make people talk about this.' So, therein lies my determination to tell people what I can do for Justin and Daddy. Justin is my little hero."

Louisiana Organ Procurement Agency
301 E. Kaliste Saloom Road
(337) 269-7044
To become an organ donor: Sign up at the Louisiana Office of Motor Vehicles, or register with LOPA online at www.LOPA.org or by calling (800) 521-GIVE.