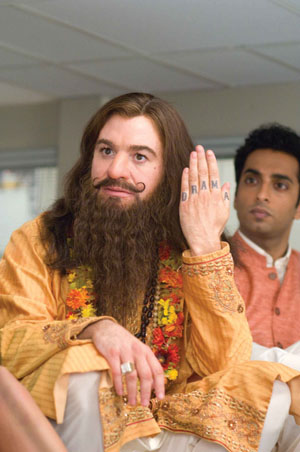 Guru Pitka (Mike Myers) falters on his own five-step path to enlightenment in The Love Guru.

Only in the messy mind of Mike Myers might Hindu spirituality and ice hockey coalesce into the underpinnings of a comedic comeback. Sure, the Saturday Night Live alum has spent the past few years Shreking his way into the hearts and minds — and toy boxes — of a new generation of fans. The impish grin and shrugging shoulders of the scatologist with the Scottish background, however, has largely been missing from the big screen since his last Austin Powers outing in 2002. The Love Guru is, among other things, Myers’ attempt to rediscover his former self, the juvenile jester who made high art of lowest comedy. But that was a past life, and apparently one not easily reincarnated.

It’s easy to see the sketch-comedy common sense in the character of Guru Pitka. American by birth, guru by the grace of God, Pitka has parlayed his elusive, acronym-heavy self-help mysticism into almost-star status. Second only to Deepak Chopra, as benign a nemesis as has ever graced a movie plot, Pitka dreams of reaching a higher plane, of receiving an audience with a higher power — Oprah. He’s not a charlatan exactly, just a not-so-humble holy man who dispenses joyfully nonsensical teachings with the best of intentions and the oddest of demeanors. He’s a guru who swears and quotes Jay Z lyrics, a lover of humanity who has a laundry list of insults for little people, a man of forced chastity falling for an adoring adherent. He might be funny for five minutes.

But the bizarre narrative of The Love Guru lasts for 88. Guru Pitka (Mike Myers) is summoned by Jane Bullard (Jessica Alba), the desperate owner of the Toronto Maple Leafs hockey franchise. Her star player Darren Roanoke (Romany Malco) has split with his wife Prudence (Meagan Good), his hockey game soon falling off in the face of his romantic woes. To make matters worse, Prudence has since taken up with Jacques Grande (Justin Timberlake), a ridiculously well-endowed Quebecois goalie on a rival team. Pitka is hired to the tune of $2 million to put Darren and Prudence back together, thus enabling the Maple Leafs to win the Stanley Cup and breaking “the Bullard curse,” which has kept Jane single all these years. If all the men in Toronto hate her for her losing team, how’s a gorgeous girl to find a soulmate?

Pitka and his greedy agent Dick Pants (The Daily Show’s John Oliver) see this as a chance to get on Oprah’s radar, so it’s a win-win-win situation. And it seems like it might be just that, but things start to go off the rails quickly, when Pitka takes a short-cut in applying his already peculiar methods to Darren’s quest — and his own.

There are delightfully absurdist moments. Guru Pitka’s greeting of choice is “Mariska Hargitay.” He strums a sitar, orchestrating Eastern-infused versions of classics by everyone from Dolly Parton to the Steve Miller Band. The guru is a mystic with a modern sense of branding, trademarking his every utterance and boasting a self-help book for every occasion. His titles are plenty amusing — If You’re Happy and You Know It, Think Again; Does It Hurt When You Do That? Don’t Do That; I Know You Are, But What Am I?

In the end, however, The Love Guru just isn’t very likeable. Pitka’s quirkiness makes little sense, even in the context of his own movie. Too often, he’s not generating any humor from within his own character; he’s simply an outlandishly-attired mouthpiece for dirty puns and double entendres. The character isn’t naturally that funny; he’s just occasionally allowed to be. And he has no one to play off of. Malco (Weeds) is an interesting and underused actor, but he’s miles above the mediocre material he’s given here and it’s impossible not to note it at every turn. Alba is as pretty and useless here as Heather Graham and Beyonce were in their Austin Powers performances. Verne Troyer makes a lackluster appearance as the Maple Leaf coach, his biggest (really only) contribution a candid behind-the-scenes one-liner that plays as the credits roll.

Without a true comic foil — maybe that’s why Myers did double duty as the international man of mystery and the evil doctor out to get him — The Love Guru lacks the fundamental chemistry that can make comedy a community of believers.