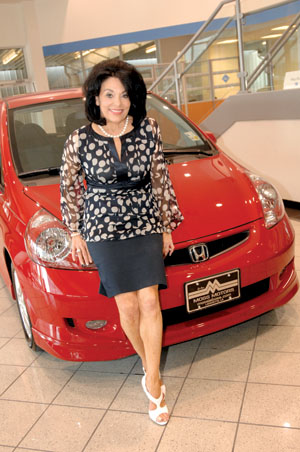 Bryce Lyons didn’t have a car note. The 24-year-old Lyons had already paid off his Chevrolet Silverado, but found his trips to the gas station painful.

“Driving as easily as I could, I got about 14 miles to the gallon,” says Lyons, the production planner for a local chemical company. When he put gas in the truck once a week, he didn’t even fill up; he “stopped at 90 bucks.”

Although his job is only about 8 miles from home and he limited all trips as much as he could, he was still paying more than $400 a month for gas. Three weeks ago he made the “huge decision” to trade in a 2003 vehicle with about 80,000 miles on it for a new vehicle. After swapping his pick-up for a more fuel efficient Ford Escape, he now gets more than 26 miles per gallon, and his gas expenses have dropped to approximately $120 per month.

“Now I have a note, but the money I save pays for the note, plus I have a new vehicle,” Lyons said.

Kelley Blue Book, the company that values cars, conducts marketing surveys throughout the year, and Lyons isn’t alone in his decision to make a lifestyle change because of high gas prices. The most recent survey, completed in April 2008, indicates that nearly half (47 percent) of the new-car shoppers surveyed would seriously consider a more fuel-efficient vehicle if gas prices rose another quarter. That’s up from 26 percent in October 2007.

Since that survey was completed in April, gas has risen about 30 cents, now topping $4 for regular at most stations. Gas prices have risen more than 30 percent in the past year. A Gallup poll done in March found that most consumers expect further increases. (At the same time, America’s oil companies posted record profits: during the first quarter of 2008, Exxon alone reported $8.4 billion in profit.)

With no immediate relief in sight, many Lafayette motorists are turning to more fuel-efficient vehicles — and that’s translated into good business for Moss Motors.

“The first quarter of 2008 has been the best in the history of the dealership,” says Moss Motors owner Sharon Moss. “People can’t afford to tank up those big old trucks and big SUVs. And so, what they are doing is that they are downsizing and coming in to buy a Honda Accord or a hybrid.”

Moss sees a change in the way people buy cars — many more are using the Internet — and the type of cars they are looking for. “Economical cars that aren’t gas-guzzlers” are popular, she said. “Cars like a Honda Accord or a Honda Pilot — it’s a lot easier to operate, a lot less expensive. The luxury market is a whole different deal, because those people don’t care. They have the money. Because of oil, and we are a growing community, we are doing well.”

“For a long time in our area, scooters just didn’t sell,” says Jeremy Ayo, finance manager at Honda of Lafayette. “Last year, I sold 20 the whole year. This year, I know we’ve sold more than that, just since January. There are people who come in and need something else besides their big truck or SUV to drive to work, and they’re picking up motorcycles and scooters for that.” Honda of Lafayette recently sold out its current scooter inventory, and expects more scooters in stock this week.

The dealership is also seeing an increase in motorcycle sales; motorcycles get much better gas mileage than cars and trucks, and even sport bikes can get 50 miles to the gallon. “Our numbers were up this month for motorcycles, and we have no supply problems on most models,” Ayo says.

Chris Corley, general manager at Shetler-Corley Ford in Crowley, says he’s also seeing a change in the type of vehicles customers are asking for. “We’re seeing a whole new line of cars coming out with these new crossover vehicles and the hybrids. The hybrids around us haven’t really taken off. The sales are up, but they are because they started at zero a year ago,” Corley says. “They’re still so much more expensive than a mainstream engine that they’re not really popular yet.”

“We haven’t sold very many,” Citron says of Ford’s hybrid Escape. “They don’t produce a whole lot of them, and we don’t sell a whole lot of them. That’s more of a thing in the media than a reality for us. They’re very expensive, and when you start to figure out how much you are saving in gas versus how much you are paying, I don’t know that you’re going to come out ahead.

“We’ve had a slight, slight shift to cars, and we have a greater demand for the economy cars,” Citron continues. “But we’re still selling trucks. Trucks are a way of life in south Louisiana. There will always be a great need for trucks in this area, and I don’t think that’s going to change. People here are not quite willing to part with their trucks.”

In the current economic climate, Citron says Ford is aggressively courting consumers. “The incentives have never been better on trucks — Ford is offering employee pricing and a $6,000 rebate right now,” he says. “Deals on the trucks and SUVs are better than they have ever been.”

He says Louisiana consumers are in much better shape than others in the country because of the state’s ties to the oil industry, and Moss agrees.

“When I went to the National Automobile Dealers Association [meeting] in February, they were talking gloom and doom for most of the country,” she says. “We’re lucky that we live where we live, because oil runs our economy — people thrive off of oil. So, the higher the price of oil, the better we do.”

Citron said his sales figures reflect it. “We were 14th in the nation in month of May for Ford,” he says. “We’ve never been anywhere near that.”

Corley echoes the comments of Citron and Moss.

“A crossover is no less than a mid-sized SUV. An Edge is the same price as the Explorer; it just gets better gas mileage. People are still spending, still buying cars. I think they are just starting to get more worried about gas prices and maybe preparing for the future as these prices go up."