The paper’s attempts to access the three lawsuits last week via a separate motion to unseal the pleadings was met with opposition from both Houghtaling (pronounced hO - tail - ling) and Perret, hers outlined in this nine-page document. Perret is now married to Lafayette businessman Hunter Perret, whose company, Louisiana Specialty Institute, is under federal investigation, multiple attorneys interviewed by the FBI tell The IND.

Perret faces Susan Theall in the April 29 runoff for the Division B seat encompassing Acadia, Allen, Evangeline, Iberia, Lafayette, St. Landry, St. Martin and Vermilion parishes. Both Republican women are vying to replace Jimmy Genovese, who was elected to the Louisiana Supreme Court in November.

New Orleans attorneys James Williams (Houghtaling’s former law partner) and Keith Doley appeared in court March 23 on behalf of both Houghtaling and Perret. That initial legal action had followed IND attorney Gary McGoffin’s March 17 request for the three case files from the Orleans Parish Civil District Court’s clerk, which denied the request saying that the entirety of each case had been sealed by order of the three different judges who heard them.

However, after researching the exceptions filed by Houghtaling and Perret — on March 23, two of the judges appeared to agree with Houghtaling and Perret that this news organization should intervene as a party in those cases, which would be impossible since the cases are closed — The IND concluded that the issue is a public records matter, hence the change of legal strategy. The IND is seeking the entire case files, including the petitions, answers, exceptions, motions, oppositions and the orders or judgments granted.

Atkins, as clerk, is the legal custodian of the three suits and by law has the burden of proving that the documents and evidence this news organization is seeking are not public records. The constitution is clear that “all courts should be open. ... No person shall be denied the right to observe the deliberations of public bodies and examine public documents, except in cases established by law.”

The IND’s suit cites case law from Copeland v Copeland, in which The Times-Picayune prevailed in its effort to unseal the divorce proceedings of the late Al Copeland:

Considering the strong constitutional bias in favor of open access by the public to court proceedings, we find the trial court’s blanket order sealing the entire record in this case to be overbroad. Although there may be some justification for sealing certain sensitive evidence in a proceeding, the parties have the burden of making a specific showing that their privacy interests outweigh the public’s constitutional right of access to the record. The trial court, should it grant such relief, must ensure that its order is narrowly tailored to cause the least interference possible with the right of public access.

The IND believes there is important information about this controversial candidate in these lawsuits; voters have a constitutional right to access that information before deciding who should represent them on the appellate court.

We base our assumption in large part on what we already know about the 2005 suit, in which we — and experts we have consulted — can find no legal privacy protections that outweigh the public’s right to know. 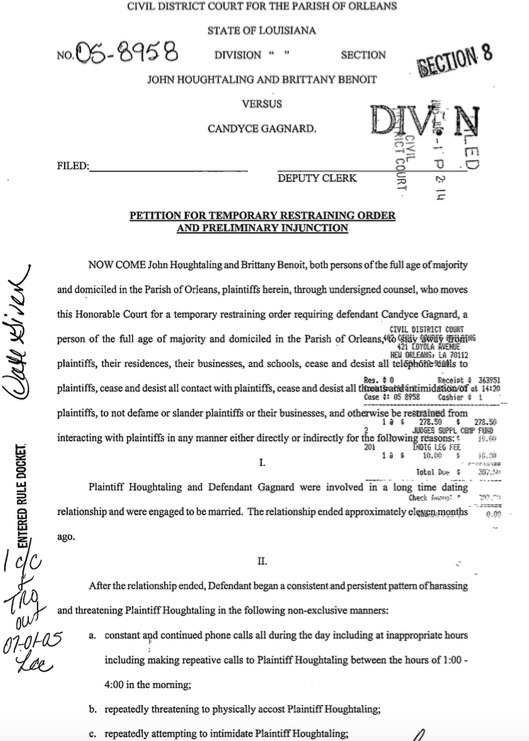 In 2005 attorney John Houghtaling asked the court for a TRO against Candyce Gagnard Perret, claiming she was stalking, harassing, intimidating and defaming him and his new girlfriend.

Within hours of McGoffin making his March 17 in-person request to the clerk’s office for the lawsuits, The IND received from a source the July 2005 petition Houghtaling filed against Perret. In it, he asks the court for a restraining order, spelling out in detail numerous instances of Perret stalking, harassing, intimidating and defaming him and his new girlfriend after he and Perret split up. That breakup came only a few months after Perret’s 2004 arrest for indecent exposure on a beach in Seaside, Fla., in which she falsely claimed, according to court documents, that she was an assistant district attorney.

Perret and her campaign declined to respond to The IND’s questions about the 2005 lawsuit, choosing instead to let Houghtaling do the talking. “[It] was sealed because it was filed in the heat of the romantic moment and shortly after its filing, I deemed the filing inappropriate,” he responded to us in a written statement. His response begs the question: Why then did he file suit against her on two other occasions? 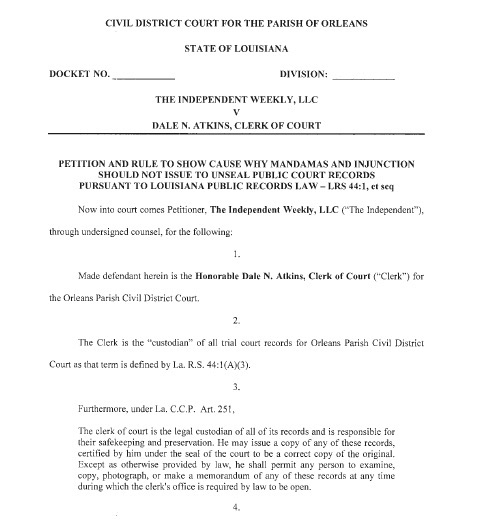 “It was their decision to air their differences in a public forum and in doing so rendered the documentation of that conflict to be public records,” The IND writes in its petition.

The IND is requesting a preferential hearing at the earliest date possible, offering that an in camera inspection by the court will protect any legitimate privacy interests.