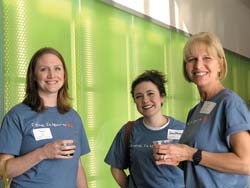 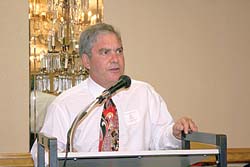 Neither wind nor storm kept techies from attending a premier event for the Louisiana Technology Council. In the aftermath of early morning tornadoes on May 15, the evening event went on as scheduled with about 75 people from a variety of businesses. Web site design firm Bizzuka was the presenting sponsor. The event doubled the membership in the Lafayette chapter of LTC and generated interest in plans for future events. Bizzuka also announced its new blog component (www.bizzuka.com), using “I think I’m about to Blog” T-shirts to get the message out.

The Acadian Home Builders got the lowdown on home sales statistics from Bill Bacqué, CEO and partner of Van Eaton & Romero. About 125 members of AHBA attended the June 3 meeting at Hotel Acadiana, including builders, Realtors, mortgage lenders and subcontractors. Bacqué reports Acadiana home sales are slowing down, beginning to decline mid-year 2007 and continuing. After three record-breaking sales years following the 2005 hurricanes, with a steady rise in prices and listings, it’s not surprising that the housing market is slowing down and, hopefully, just leveling out. The highest sales over the past five months are in homes priced between $150,000 and $300,000, with the greatest slowdown in homes priced above that. Listings are up for 2008, but sales are down across the board.

There were congratulations all around, as Global Data Systems broke ground June 10 for a 7.3-meter hub station at the LITE center. Sen. Mike Michot spoke at the event and congratulated the local company on its decision to remain in Louisiana and contribute to the technology boom. Chris Vincent, GDS president, noted how leaders in Lafayette have encouraged technology by creating a fiber infrastructure that will allow for growth and expansion. The new hub station will add 51 high tech jobs to Lafayette. Michot said GDS is an example of how companies can partner with LITE and utilize the technology available through the facility. “This is exactly the kind of project we want to support and see more of,” he said. Following the ground-breaking ceremony, there were tours of the new mobile unit developed by GDS for use in emergency situations. The custom units allow companies to move off site or into devastated areas and remain fully functional with complete phone, video and computer access. Hats off to GDS for turning emergency preparedness lessons learned into ground-breaking solutions.

The coffee was flowing and business cards changing hands at the Greater Lafayette Chamber of Commerce’s annual Business Over Breakfast. Held in the Cajundome Convention Center June 10, the crowd of more than 500 arrived bright and early to begin networking and enjoy a full breakfast. The program kicked off with a lively video of karaoke Q & A performed by lip-syncing members of the Leadership Lafayette Class XXI and select community leaders. (Ask City-Parish Prez Joey Durel to sing a couple of lines of The Beatles’ “Ob-La-Di, Ob-La-Da” — priceless.) Following a standing ovation as the UL Girls Softball Team was recognized and an encouraging mid-year update from Chamber Chairman Robbie Bush, the keynote speaker gave members information from the Fed on the state of the economy. Tom Cunningham, vice president and associate director of research for the Federal Reserve Bank of Atlanta, encouraged businesses to roll with the economic punches and expect a learning curve with new hires as baby boomers retire. Presenting sponsors for the event were Associated Travel Group, AT&T and Home Bank. 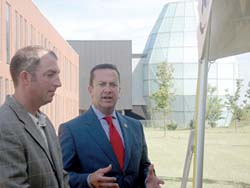 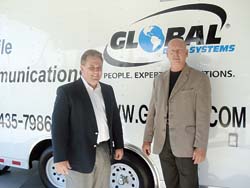 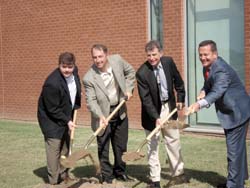 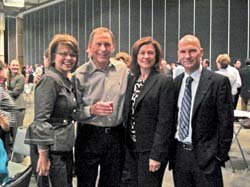 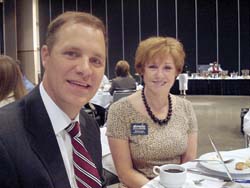 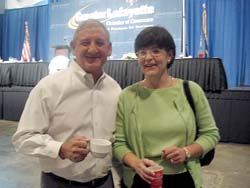 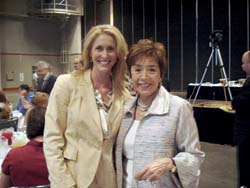