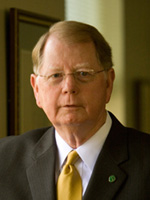 Randy Moffett, president of Southeastern Louisiana University in Hammond, was the unanimous choice yesterday to replace Sally Clausen as the system's top official. The UL System's board of supervisors voted yesterday to negotiate a contract with the 61-year-old, who began his education career as a high school teacher in the Jackson Parish School System and has been SLU's president since 2001. Moffett is a native of Jonesboro.

Moffett will be the seventh president of Louisiana's largest public university system.