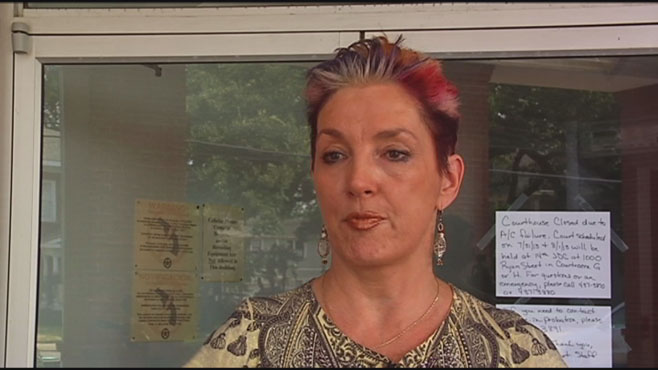 A Louisiana man has been jailed on charges he financially exploited a federal judge while working as her personal assistant, authorities said Thursday.

Justin Gray, 28, of Lake Charles, is accused of using U.S. District Judge Patricia Minaldi's credit cards without her authorization and forging her name on checks in transactions that exceeded $64,000 between March 2016 and January 2017, the Calcasieu Parish Sheriff's Office said in a statement.

Court records unsealed last week revealed Minaldi was required to get treatment for alcoholism so severe that a colleague asked a court to rule she cannot take care of herself.

Parish prosecutor Cynthia Killingsworth and one of Minaldi's attorneys said Gray worked as a personal assistant to the judge, who has been on medical leave since late December.

Gray turned himself in Wednesday after investigators obtained a warrant to arrest him on 41 counts of forgery and three counts of unauthorized use of a credit card, the sheriff's office said. A state judge set Gray's bail at $56,000.

Reached by phone on Thursday, Gray referred questions about the allegations to his attorney, who didn't immediately respond to calls seeking comment.

The mandate for Minaldi to complete at least 90 days of substance abuse treatment came from the chief judge of the 5th U.S. Circuit Court of Appeals, according to the court records unsealed last week. She arrived at a rehab facility in Florida on Jan. 4.

Minaldi told reporters in Lake Charles last Friday that she had an assistant "who was not really taking care of me and basically dumped me at the facility in Florida." She said he had known him for "quite a while," trusted him and had offered to let him stay at her home in exchange for his help around the house.

"Unfortunately, he took care of himself rather than taking care of my issues," she said.

U.S. Magistrate Kathleen Kay, a longtime friend and colleague of Minaldi, filed a lawsuit last month challenging Minaldi's physical and mental capacity to manage her personal and financial affairs. In a court filing, Kay said her review of Minaldi's finances "showed quite clearly that (she) had been financially exploited" by the man described both as a caretaker and personal assistant.

An Associated Press investigation revealed Minaldi's pattern of unusual behavior on the bench preceding her mysterious removal from a string of cases last year.

In February 2016, Minaldi was pulled off a man's fraud case following a series of mistakes in routine trial procedures.

The next month, Minaldi was removed from criminal cases against a sheriff and several subordinates. The order came four days after Minaldi abruptly adjourned a hearing to accept guilty pleas by two sheriff's deputies, who wound up pleading guilty later that same day before another judge in another courthouse.

On Dec. 6, a criminal trial in Minaldi's courtroom was cut short without explanation before a jury could be picked to hear a child pornography case.

Minaldi lives in Lake Charles and has served as a federal judge in the west Louisiana city since 2003.