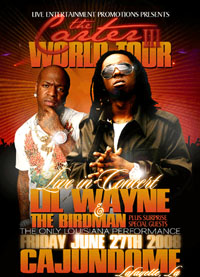 The Carter III World Tour rolls into Lafayette tonight at the Cajundome with Lil Wayne and Birdman. The Cash Money Millionaires hail from New Orleans.

Lil Wayne's Tha Carter III album was released on June 10 and sold more than a million copies within the first week, a feat that hadn't been accomplished since 50 Cent's 2005 release The Massacre. "Lollipop" was Lil Wayne's first No. 1 single, and this past week he had seven songs in Billboard's Hot 100, tying with -T-Pain for having the most songs in the top 100 for a rapper.