Former addict Nora Sparks is one of the clients benefiting from a partnership between Acadiana Outreach Center and the UL Lafayette School of Architecture and Design. 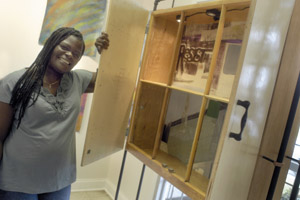 One night last summer in Houston, Nora Sparks found a nice park bench, ate a fistful of pills and hoped that a fourth attempt at suicide would finally kill her. After blacking out, Sparks woke up in a hospital bed with a nurse glaring at her. "She was angry with me," says Sparks. "They spend every day trying to save lives, and I was trying to end mine."

It was the low point for the 1985 Northside High grad and mother of four, who had dropped out of UL Lafayette and moved to Houston to give college another try. Without a network of family and friends in Texas, she drifted into a maze of drug and alcohol abuse, homelessness and failed attempts at recovery. Sparks lost custody of her children and descended into full-blown addiction. "It was the only way I knew to escape the painful parts of my past," she says. "Use or die ' those were the only two options that I could see."

When she was released from the hospital after her unsuccessful suicide attempt, Sparks was left with nothing but the medical gown a nurse gave her. "That's when I knew I had to make a choice to stop," she recalls, "and this time, forever." She called her sister living in Lafayette to help her look for a program and found Acadiana Outreach Center.

"I was walking through the warehouse one day [on campus], and I saw a pile of broken and mismatched tiles," remembers Keller. "It struck me then that perhaps our clients could create new things out of discarded debris." When UL tore down a building in the College of Business, the university donated the architectural elements to the Outreach Center. Keller contacted Lasala, who had renovated the Acadiana Outreach Center campus with a group of his architecture students in 2003.

With more than 80 windows and window panes to work with, Lasala organized design students from UL to construct furniture out of the used materials. Three students were chosen to complete a class in which they earned credit for working with Outreach clients to design and build furniture. "The project provides great practical experience for the students in design," says Lasala. "It also breaks down the stereotypes that are often associated with the homeless."

For Sparks, participating in the workshop was not easy. She struggled with measuring boards, cutting wood and utilizing her creativity before bringing her project to fruition. "Being a part of something like that, and making something beautiful really helped my self-esteem," she says.

Ward Oge, a retired carpenter and member of Americorps, has been an essential part of the project and oversees the workshop on a day-by-day basis. "I never saw myself as a teacher, but giving back in this way just makes you feel good," he says. Oge loans and donates many tools to the Outreach Center and makes trips to New Orleans to gather reusable materials left behind by Hurricane Katrina. "I love to see the clients' faces when they admire the product of their hard work," says Oge.

Like Sparks, 24-year-old Acadiana Outreach client Justin Branch is learning new life skills through the program. "I learned that I got frustrated easily and would rush through my work," says Branch, 24, who recently completed a coffee table. "Building the table really helped me to focus on something, put time in it and do it well."

ReNEW is currently run primarily with money from grants and donations, but a few pieces of furniture were auctioned at last year's Palates and Paté, the Outreach Center's annual fundraiser. ReNEW hopes to slowly transition into selling the pieces as a way to ensure a self-sustaining program. "The clients will be preparing artist statements sharing their stories to go along with the pieces that they create," Keller says. (Works from Acadiana Outreach Center clients will be on display during ArtWalk on Saturday, August 11.)

Nora Sparks graduated from JOTC in May and now runs her own cleaning service, Sparkles by Moms, which the Outreach Center guided her in starting last January. She has her own apartment and is no longer on welfare, and has begun the process of reconciling with her four children. "It makes me so happy that today, I am a part of their lives," she says.

Sparks still visits her counselor at the Outreach Center weekly, and has been sober for more than a year.