Just in time to navigate holiday feasts, a new book from a leading researcher on eating habits shows how to recognize and avoid predictable overeating triggers. 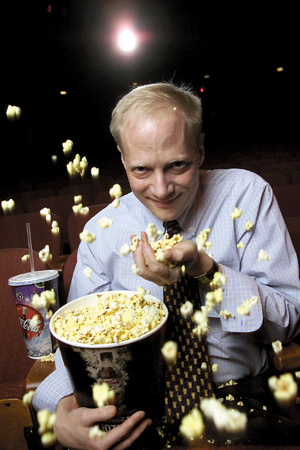 Brian Wansink has some advice for people trying to lose weight: stop thinking about it. Wansink, a professor of marketing and nutritional science at Cornell University, has conducted numerous eating studies that reveal people thoughtlessly consume more food than they realize. In his new book, Mindless Eating: Why We Eat More Than We Think, Wansink humorously demonstrates with experiment after experiment that given the right set of cues, people will overeat even if they're not hungry, and even if the food tastes horrible. In Wansink's opinion, since we overindulge with nary a thought, we can also drop a few pounds without straining our brains.

How mindless is our eating?

We find the typical person believes they make 15 decisions about food a day, but in reality they make well over 200. Take this morning ' you decide what kind of cereal you want, whether you want half a bowl or a full bowl, whether or not to have a refill, put whole milk or skim milk on it, and whether or not to put sugar on it. So before you even have a bite to eat you've implicitly made at least a dozen decisions. The problem lies in that most people think they've only made one, whether to have Corn Flakes or Fruit Loops. There's in fact all of these other things around us that can be traps.

What are some of these traps?

One is when it comes to determining what portion we're going to pour and eat. What's the right amount of cereal or popcorn to pour? Who knows? So we look around us very subconsciously for cues to suggest the appropriate amount. Those cues might be the size of the bowl, size of a plate ' 6 ounces of pasta on an 8-inch plate looks like a pretty good serving, but those same 6 ounces on a 12-inch plate doesn't even look like an appetizer. So just visually you're going to use more ' in fact, 25 percent more if you bump up the size of the plate. Proximity of the food to where we're sitting is another. We did an experiment with secretaries where we gave them free Hershey Kisses on their desk. Every night we would go and refill the dish. We found if we put it on their desk, they would eat about nine of these kisses a day. If we put it a few feet away, the number dropped down to four.

Yes, but food still has to taste good, doesn't it?

When we've talked to people who said they've overeaten in a given situation and asked them why, they usually say they were really hungry, or the food was really good. These two things do influence people, but so do very simple cues around us. We designed this situation in a movie theater where people were neither hungry nor given good food. We took people, who had just finished dinner, and we gave them popcorn that was 14 days old ' it was like Styrofoam pellets. We gave it to them in large or medium sized buckets. Even though these people were full and even though the popcorn was terrible, they still ended up eating 35 percent more if they were given a bigger bucket.

People will eat more just because the bucket is bigger?

That's what makes these cues around us so powerful. We all believe that we're too smart to be influenced by them. We believe we're independent minded and masters of our own destinies. To acknowledge that something silly like the size of a dish would cause us to eat twice as much is a thorn to our own self-identity. The difference between being two to three pounds heavier one year from today is really just the difference between eating 25 more calories a day, and that's the difference of five M&Ms a day for a year.

Five M&Ms isn't much, but what about the other direction? How much can we cut out, but not really notice?

Nobody gains 50 pounds overnight. Most people gain 50 pounds at the rate of 2-5 pounds per year. Yet when we want to lose weight, we expect to lose that 50 pounds over a weekend. If we go on a deprivation diet ' you know one of the popular ones ' we might lose the weight, but it's very temporary because we haven't changed the rest of the patterns in our lives. The key to losing that weight is to do it the same way we gained it, which is reasonably slow. We can cut 300-400 calories out of our day, everyday. We won't really notice it; we won't feel deprived, but over the course of year that's 30-40 pounds.

You don't think too much of most diets, which you consider deprivation. What's the alternative?

So we don't need to deprive ourselves, but we should cut down on the amount?

We want to re-engineer our homes, change our patterns, so we eat 200 fewer calories a day instead of 200 more. If we buy bulk amounts of cookies, we break them down into smaller bags, so we're not tempted to eat them all at once. We store them somewhere, so they aren't sitting on the table waiting for us to devour. Move the cookie jar out of our traffic path, or better yet replace it with a fruit bowl. It also makes a difference where we decide to store foods in our house, whether we put them in that convenient cupboard we open 30 times a day, or we put them down low, up high, or behind other items.