A downtown coffee Mecca closes its doors. When Café Bonjour owner Sharon Falgout posted a small handwritten sign on the glass door of her Jefferson Street coffee shop announcing June 17 as her final day serving cappucinos and lattes, there was an uproar from her loyal customers. A barrage of e-mails called on regulars to bombard building owner Jim Poche with letters and phone calls, begging him not to terminate Falgout’s lease. People congregated in restaurants and bars, muttering in corners, and caffeine-influenced conspiracy theory abounded. 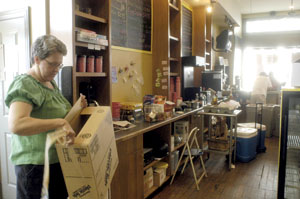 Falgout, sick at heart about losing her business, searched for someone to take over Café Bonjour, to no avail. Poche’s decision put a final stake through the heart of the downtown coffee mecca, and he was painted as a black-hearted villain of the Snidely Whiplash variety.

“Ah, rumor,” sighs Cathy Webre, Downtown Development Authority executive director. Downtown is like a small town inside the city of Lafayette, with all the swirling gossip of a walled enclave. The truth of the matter is fairly mundane.

Poche and his son Bryant own the 1930s two-story building at 625 Jefferson St. Four years ago, they leased the downstairs to Mello Joy, which opened up a popular coffee shop to promote its local brand of coffee. The upstairs tenants are the offices of chemical company Cal-Chlor. After two years, Mello Joy decided to get out of the retail business. Falgout had been working as a paralegal at Broussard and Kay; the office manager for the firm was the wife of the owner of Mello Joy. “She knew I was interested in owning a coffee shop,” Falgout says. “It was a dream of mine. Mello Joy gave me a good deal.”

Falgout jumped in with no business experience, and while business picked up when she took over, it wasn’t enough for her to take the leap when it came time to renew the lease for another two years. “The rent is very high there,” she says. “I was on a month-to-month lease, and I was looking to sell, for financial reasons,” she says. Falgout was upset when Poche told her that without a lease, she couldn’t sell her business. So to save herself paying another month’s rent, she abruptly closed her doors and is selling off her equipment.

“When I originally purchased the building,” says Poche, “I had negotiated with Mello Joy, and we were real proud of having them in there. A while back, when Mello Joy wanted to leave, we actually contacted some of the national coffee chains and couldn’t get a response from them.” Poche says that it was unfortunate Café Bonjour owner Falgout wasn’t able to make the business work. With the café out of the picture, Poche says his tenant, Cal-Chlor, has the right of first refusal to rent the ground floor. “The situation we have is we’re in negotiations for tenants for the first floor.”

The demise of the downtown coffee shop isn’t quite as bleak a prospect as some have made it out to be. “There are 24 places offering food in downtown,” says Webre. “And don’t forget, Dwyer’s is a coffee shop as well.” The other welcome news is that Poche’s business, Southwest Contractors, is under contract to purchase the Tribune Printing property on Vermilion Street. “We plan on closing in three to four weeks,” Poche says. “The building has the potential for four tenants at street level, facing Parc Sans Souci. I certainly can see a coffee shop opening there.”

Southwest Contractors is one of the largest property owners in downtown. In addition to 625 Jefferson, the business also owns the old Dixie Office Supply building at 201 West Vermilion St., the Bell building on Buchanan, and the old Lafayette Motors site — what is now parking lots adjacent to Chase Towers. The company plans to build two five story buildings with mixed commercial and residential use there, to be named Place de Lafayette.

Downtown regulars miss the social space the coffee shop offered — a place to read the paper, hold a business meeting and surf the Internet. But Webre, who has weathered the permutations of downtown for decades, is confident another business will take up the slack. “Look at the possibilities on Vermilion [the Tribune building]. We think it will be a great amenity for downtown.”