The Acadiana Symphony Orchestra and Roddie Romero and the Hub City All-Stars team up for a free July 4 concert. 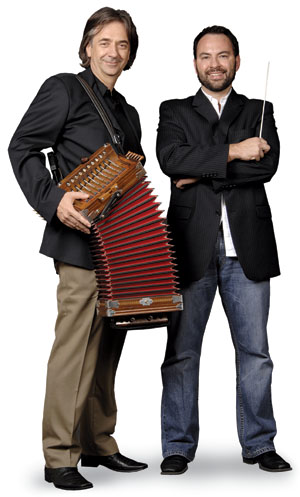 When it comes to celebrating Independence Day, America has a traditional soundtrack. The marches of John Philip Sousa, the melodies of legendary composer Stephen Foster and the sweeping crescendoes of Tchaikovsky’s 1812 Overture are familiar notes for symphonies across America on July 4 — including the Acadiana Symphony Orchestra’s festivities this Friday. But there’s also an only-in-Acadiana twist: after an opening set by Roddie Romero and the Hub City All Stars, Romero and his band will join the ASO for four songs from the band’s recent Grammy-nominated album, The La Louisianne Sessions.

“I call it crossovers,” says Maestro and ASO Musical Director Mariusz Smolij (pictured, left). “We’ve been doing it for a number of years, with artists like Sonny Landreth, Michael Doucet and the Michot Brothers. It’s a little tradition we have in our area, and it’d be a shame not to take advantage of our local popular music.”

This is uncharted territory for Romero. “They scored our music, and the songs picked are a mixture of zydeco, rootsy songs and some Cajun music,” he says. Besides “Party Down,” “Riverside” and “Tes Yeux Bleu,” ASO has tackled “Viens Avec Moi,” which Romero originally recorded as a solo acoustic track.

“It’s an open canvas, and I’m extremely excited to see what they’ve come up with,” says Romero. “It’s an edge-of-the-seat feeling right now.”

The Acadiana Symphony Orchestra’s Red, White & Boom! 4th of July concert takes place in Parc International. Admission is free, and food and drink vendors will be on site. Ice chests are not allowed. Gates open at 6 p.m.; Roddie Romero and the Hub City All-Stars begin at 7:15 p.m., and the ASO concert begins at 8 p.m.