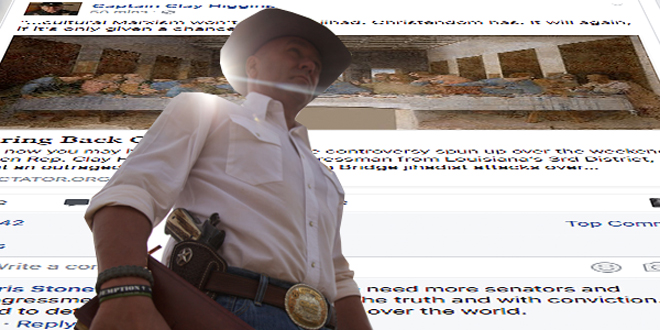 [Editor's Note: This story was updated at 1:54 Wednesday afternoon to include a comment from the constituent involved in the exchange with Higgins.]

Replying to a barbed comment about one of his more controversial videos, Rep. Clay Higgins appeared to tell a commenter he wished she were dead.

“This is sensationalism and a cheap tactic to appeal to uneducated voters. You are disgusting, just like tRump [sic],” wrote Katy Richard in a comment posted to a thread about the video, in which Higgins rattles off rifle rounds and his signature rhetoric, his arms bare in a SWAT vest.

“Which makes me aspire to your eventual absence, dear lassie,” Higgins responded to Richard from his personal Facebook account. The exchange happened in late May, just as the video was published. 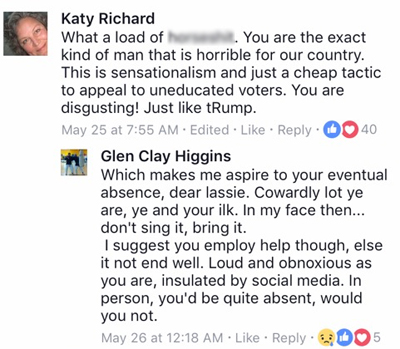 The sentiment falls short of a threat, but the tone of his whole response comports with his penchant for rhetoric decorated with themes of righteous violence.

There was furor over Higgins’ recent call to a Holy War in response to recent terror attacks in London and Manchester. “Kill them all,” he said in the widely distributed post, invoking a war against “Islamic horror.”

He took heat from the national press, with the post going viral via pieces published by CNN, the Washington Post, Huffington Post and others. In responses to media inquiries about the statement, Higgins softened and clarified his sentiments, but stood by them. “I’ve never been accused of being politically correct. I call things the way I see them,” he said in a statement.

“I’m passionate about it because I love my fellow man,” Higgins told the Post. “I would remove those that would destroy the innocents amongst my fellow man.”

Higgins has a reputation for a fiery tongue, one that he’s brandished liberally in public, typically while embracing his sometimes controversial Captain Clay persona. His reply to Richard is not the first time he’s verbally abused a commenter on Facebook. During his campaign for office last year, he belittled a woman in a thread about the Orlando massacre, in which dozens were murdered in a mass shooting at a gay nightclub, and appealed to a need for “superior violence” in the fight against terror. “Panzer tanks will not be stopped by flowers,” he replied to the woman, who criticized his call to righteous violence. He then told her to “shut the f**k up.”

A shrewd man with a knack for showmanship, this kind of outburst could readily be designed to garner the sort of attention in which the Cajun John Wayne revels. He’s not readily backed down and apologized for episodes like these, the common strategy for politicians in scandal. That attitude has played well for some voters, certainly many that see virtue in holding a hard line in an increasingly ugly culture war.

We reached out to Higgins for comment, but have not received a reply as of publishing this piece.

We also reached out to Katy Richard on Facebook Wednesday morning and received this response:

I was slightly alarmed at first. I asked him if that was a threat, to which I got no reply. And to threaten a constituent on Facebook is just cowardly. His extreme religious views have no place in our secular, democratic government. I think he should focus on getting help for his district, which includes some of the poorest, most illiterate and at-risk Americans in the entire nation. He should stop with his fear-mongering videos and hate-filled rhetoric about things that really aren’t the problems facing his constituents in Louisiana. I’d say, take off the costumes, put down the guns and start doing some real work to help us move forward in Louisiana.