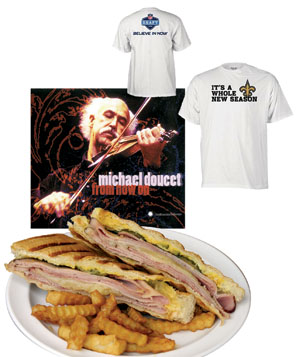 A DIFFERENT SIDE OF DOUCET
From Now On, BeauSoleil fiddler Michael Doucet’s first album on the Smithsonian Folkways label, was recorded in three sessions with no rehearsals, overdubs or song lists. “In the first session,” Doucet writes in the liner notes, “I simply walked in, took out my fiddle, and played tunes as I would play them at home.” The result is a loose, laid-back acoustic album where Doucet shines exploring a range of genres, including New Orleans funk (“Everything I Do Gonna be Funky”), gospel (“A Closer Walk with Thee”) and traditional Cajun (“Madame Young”). Recorded in LPB Studio One in Baton Rouge and at La Louisianne Studio in Lafayette, the album also features Lafayette fiddler Mitch Reed and New Orleans guitarist Todd Duke. From Now On can be ordered for $15 or downloaded for $9.99 from Smithsonian Folkways at www.folkways.si.edu. — Nathan Stubbs

IT’S A WHOLE NEW SEASON
Hope springs eternal in the NFL offseason, as every diehard football fan clings to the belief that this year is the year their team wins the Super Bowl. That’s especially true for New Orleans Saints fanatics, considering the boys in Black and Gold have never made it past the NFL championship game, but Drew Brees and Co. are looking to rebound from last year’s disappointing campaign. As the countdown to the Saints’ Sept. 7 opener against the Tampa Bay Buccaneers continues, Reebok has just the T-shirt for Saints fans. The front of the comfortable 100 percent cotton white shirt is emblazoned with a gold fleur-de-lis symbol and the slogan, “It’s a Whole New Season.” The back has the 2008 NFL draft logo and the message, “Believe in Now.” The T-shirt is available exclusively online at www.nflshop.com for $19.99. — Scott Jordan

CUBA LIBRE
It’s hard to get enough barbacoa, a richly flavorful Cuban dish of chicken pot roasted in butter and soy sauce, but at Llopiz  and Nardo’s it’s on the all-you-can-eat buffet. So are some other great dishes like ropa vieja (seasoned shredded beef) and fried fish spiked with a spicy citrus seasoning. Owners Elizabeth Llopiz and Ibis Nardo, both political refugees from Cuba, say they love cooking, working and freedom. “We are happy because everybody who comes fills up their plates and leaves them clean,” says Llopiz. The two women serve up homestyle Cuban food for lunch every day but Saturday, for a mere $6.99. Huge Cuban sandwiches cost $5.75. The happy smiles bestowed on customers are free. Open only two weeks, Llopiz and Nardo’s is located in the strip mall directly across Kaliste Saloom from Fresh Pickins. For more information call 235-1625. — Mary Tutwiler