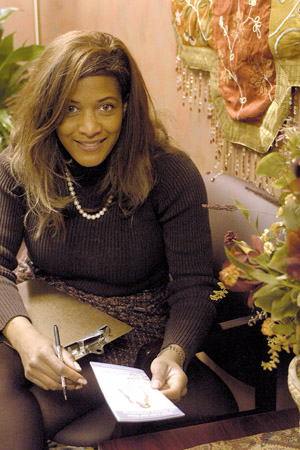 Dr. Allison Taylor's 36-year-old patient's quality of life several days each month depended on how close she was to a bathroom facility. Sometimes it was easier just to stay home.

Taylor, an OB-GYN at Lafayette General Medical Center, says the mother of four suffered from menorrhagia, the medical term for excessive menstrual bleeding. "It really impaired her life to have to go to the restroom every two hours," notes Taylor.

The woman was certainly not alone in her very private matter that at times can cause public embarrassment and lead to other health problems like anemia and fatigue. The National Women's Health Resource Center, a nonprofit women's health group, estimates that one in five women suffers from menorrhagia ' a non-life threatening condition that historically has led to about 30 percent of the more than 600,000 hysterectomies (surgical removal of the uterus) performed in the United States each year.

But those stats on hysterectomies, invasive procedures requiring weeks of recovery, are changing ' thanks to technological advancements in treating heavy menstrual bleeding. For the past two decades, endometrial ablation, a minimally invasive procedure that involves the removal of the uterine lining, has proven an effective alternative to heavy or prolonged bleeding.

Taylor's recommendation for her patient was a newer form of endometrial ablation called NovaSure, a procedure introduced about four years ago and utilized by Taylor and other local doctors for the past couple of years.

Such ablation is only for pre-menopausal women who have completed their childbearing. And while most women will not be able to conceive after the procedure, there is a slight risk of pregnancy, so they should continue to use contraception until menopause. "You should be absolutely certain you don't want to have any more children," Taylor says.

And heavy bleeding does not necessarily make a woman a good candidate for the procedure. "There are lots of reasons and causes of heavy bleeding," she adds. The main cause is hormonal changes, which can also be addressed with oral contraceptives for women who may want to become pregnant down the road. "Many people respond to oral contraceptives to control their bleeding, but many do not," Taylor says. Oral contraceptives, however, are typically not prescribed for smokers and women over 35 with a family history of breast cancer. For this population, ablation may be an option.

Heavy bleeding, however, can also be caused by cancer. Before recommending ablation, local physicians review their patient's medical history and perform a physical exam that includes a biopsy of the uterine lining.

About six different types of ablation technologies are available, and the results, a 75-85 percent success rate in controlling heavy bleeding or eliminating bleeding altogether, are typically the same. The technology is getting better and better.

NovaSure, for example, is a 90-second treatment performed using IV sedation, so the patient quickly resumes daily activity ' typically moderating her behavior for just a couple of days.

Technological advances like NovaSure have cut the entire process for the procedure back to about five minutes, compared with longer times for similar procedures, which can be more cumbersome for the physician and support staff. In fact, Taylor hopes to eventually offer endometrial ablation in her office. "The goal is to do it in the office without IV sedation, with a little bit of Valium a little bit of Toradol (a nonsteroidal anti-inflammatory drug like ibuprofin).

With newer technology like NovaSure, no medications or other preparation of the uterus is necessary before the procedure. The doctor slightly dilates the cervix and inserts a slender wand through the cervix into the uterus. A triangular mesh device is then extended through the wand where it expands to conform to the dimensions of the uterine cavity, and electrical energy is delivered into the uterus on average for 90 seconds. The mesh device is retracted into the wand and removed. This new generation of devices was designed with a safeguard that searches for a breach in the wall of the uterus before delivering the energy.

The cost of the ablation treatment ranges from $8,000 to $10,000, which includes the outpatient surgery, obstetrician/gynecologist physician charge and the cost of the device. What the patient pays varies based on a number of factors, including her insurance plan and deductible and co-insurance amounts; according to NovaSure's literature, the risks include thermal injury to adjacent tissue, perforation of the uterine wall, and infection or sepsis. If successful, the patient's menstrual bleeding will be reduced to normal or light levels or eliminated altogether.

Though ablation treatment is not for everyone with heavy bleeding, Taylor hopes women suffering with menorrhagia talk to their doctor about this option. "Sometimes the complaint is, 'I bleed most days of the month,'" Taylor says, noting the endometrial ablation was like a new lease on life for the 36-year-old mother of four. "I think she was the happiest patient I've ever had."