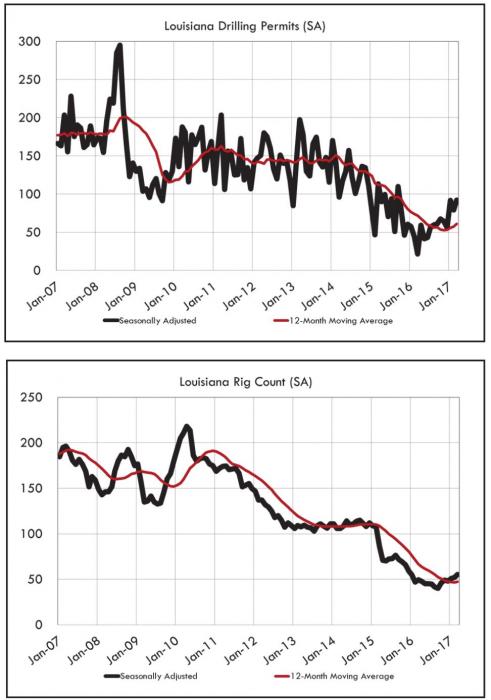 When LEDA and ABiz unveiled the Lafayette Economic Performance Index in 2012, we hoped the report would provide readers with necessary information to make important business decisions. In the subsequent five years, the index has been a reliable barometer of Lafayette’s economy. While the index itself has been tweaked slightly, the final result remains the same — a single score that can be tracked and compared over time. In what may be my final ABiz column (the paper has announced that it is suspending publication indefinitely), I want to share some good news from the 1Q 2017 EPI.

The EPI monitors 16,000 data points and 16 local statistics that together illustrate a unified story about how Lafayette’s economy is performing. In 2016, three new indicators were added: average weekly wage, new business starts and foreclosure rate. These additions replace unemployment insurance data from the Louisiana Workforce Commission.

It was not until the first quarter of 2015 that the EPI was affected by lower oil prices that materialized in 2014. After 24 months of weak numbers, the EPI is beginning to see improvement across the board, which is an encouraging sign. When looking at all of the indicators, the first quarter of 2017 showed modest improvement. Twelve of the 16 indicators show improvement when compared to March 2016. When all three categories of indicators — leading, current and lagging — move in the same direction, it means that the local economy will also move in that direction.

We’re not strangers to the ups and downs in the energy industry. Even with the economic diversification we’ve experienced over the past three decades, we are not immune to sustained pressures to a predominate industry — as we have experienced with the energy downturn. However, we are beginning to hear optimistic news from our energy companies; that upswing is reflected in the EPI.

Much like residential building permits, Louisiana drilling permits are a leading indicator because they represent future production, jobs and income. Because the energy industry plays such a large role in the overall performance of the local economy, drilling permits may help predict future economic growth or contraction. Ninety-four drilling permits were issued across the state in March 2017. That’s a whopping 327 percent increase over March 2016 — which saw only 22 rigs, the lowest since the start of the index in 1997. As Lafayette is the service hub for energy production in the southeastern U.S., it’s very likely that local businesses will service many of these projects if they come to fruition.

The Louisiana Rig Count is considered a lagging indicator because changes in these numbers are seen three to six months after the overall economy shows signs of adjustment. Decisions about rigs are made in response to variables such as price, economic conditions, government policies and others. Total Louisiana Rig Counts had been on a slow decline since May 2010; however, that decline accelerated in March 2015. In September 2016, we began seeing a modest month-to-month increase in the rig count after the count reached the all-time low of 42 rigs in August 2016. Rig Counts are up 12 percent compared to March 2016 — 55 rigs compared to 49.

The 2Q EPI will be calculated in September. We will be able to see if the improvements made in the first quarter are a continuing trend or a temporary bump based on optimism in the energy industry and flood recovery. Because the EPI is an unbiased account of the economy as a whole, the index will help us identify changes in the economy and quantify the impact. The EPI can be found at www.lafayette.org/epi.