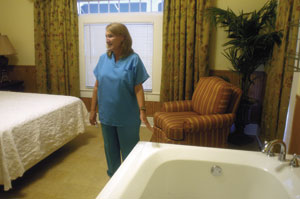 Midwife Anne Lastrapes likes to compare her role in natural childbirth to that of a coach and his football team. "The coach wouldn't go out there and say, 'your arms don't look like they are strong enough to throw that ball 100 yards, and so I really question whether or not you're going to be able to do that.' They're gonna lose the game," she says. For Lastrapes, it's the same with giving birth. "If you constantly tell a woman that her pelvis is too small, her baby is too big, her pain threshold is not adequate, guess what? She's not going to be able to do it. Somewhere along the line, she's going to fail."

Lastrapes, along with Kathy Acree, is part of the state's first freestanding birth center in Lafayette on St. John Street. Gentle Choices, an alternative to a hospital birth, aims to direct women toward a natural birth, with no drugs or epidural.

"Women have developed a lot of fear about childbirth, and they need to be given their confidence back," says Lastrapes. "I think that's what appeals to them so much is that they have choices of how they're going to labor and of course with whom and who's present at their birth," she says. "We are with them from the beginning of their prenatal time to their postpartum time. We don't have a lot of people that come into a hospital, from the housekeeping people to the dietary people. It's us. We're all that."

The first baby, Isabelle Forestier, was born June 29 to parents Tricia and Brian before the center was even officially open. Six more babies are on the books, arriving August-November, and the center has received inquiries from as far as Shreveport. This was Tricia's third child, and she says she was determined to have a natural, water birth. "Personal attention makes me feel at ease and gives me the confidence that I can do a natural childbirth," she says. "A birth is your experience; it's not the hospital's experience."

Lastrapes and Acree are both licensed midwife practitioners by the state Board of Medical Examiners and have been practicing as midwives in home births for more than 20 years. Lastrapes is also a registered nurse and trained under Acree to become a midwife. The two women were approached by farmer and former state senator E. Edward Barham, who had been researching midwives and birth centers all over the south and wanted to open one in Lafayette. Barham owns the Gentle Choices facility, and the two midwives and office administrator Donna Romero are contract employees.

Barham, who now lives in Oak Ridge, says the practice of midwifery has never died out in south Louisiana. According to the Board of Medical Examiners, there are 15 midwives licensed to practice in the state, 10 of those with Louisiana addresses. "It seemed to us it was something that ought to be done," says Barham. "Lafayette was the place where home birth never went away. All the pieces were in place there."

Located in an old home at 1424 St. John St. across from Our Lady of Lourdes, Gentle Choices looks more like someone's house than a medical facility. The front porch is lined with hanging ferns, and the waiting area is decorated like a living room, with a deep sofa and fireplace. Two birth suites contain antique beds and flowered curtains. "We wanted it quaint and personal," says Lastrapes.

While each room contains a queen-size bed, Lastrapes says most women don't give birth in the bed. The first suite includes a double soaking tub for water births and a birthing ball in the corner. "Every other woman has a water birth in my home practice," she says. "Most women hate the bed," she continues, "and they hate to deliver in the bed. The way you would probably see a woman delivering in here is she would get down in a squat, and she would give birth in this position. And we'd be right down there on the floor with her." (Lastrapes' husband is building her a birthing stool to make the squatting process more comfortable.)

Though the midwives would not discuss costs ' most insurance companies cover the cost of services provided by licensed midwives and birth centers and the center accepts most hospital plans ' they say a birth at Gentle Choices is less than one in a traditional hospital setting.

Women interested in having their baby at the center must first go through an extensive interview process to rule out high-risk. "The birth center is for healthy, low-risk women who choose a birth that is unmedicated," explains Lastrapes. But the center does have a plan for emergencies and hospital transport. Maternal fetal medicine specialist Whitney Gonsoulin serves as backup physician, and the center is stocked with supplies, like sutures, IVs, resuscitation equipment and medication for bleeding.

The center also offers a range of prenatal and postpartum care. The midwives see their patients throughout their pregnancy, just as an OB GYN would, and conduct follow-up appointments after the baby is born. "Usually when you're on call for a birth, you usually give it a whole month, because women can go two weeks before their due date to two weeks after," says Lastrapes. "We're always ready for them. We have an answering service that picks up, and they know who's on call."

Gentle Choices is considering adding other services, like Pap Smears and birth control. "There's some other avenues of women's care that we may look into in the future, maybe a well-woman GYN care by a woman's health nurse practitioner and a certified nurse midwife, to allow women if they want annual exams," says Lastrapes. "I think that women would be very pleased to be able to continue on where they started."