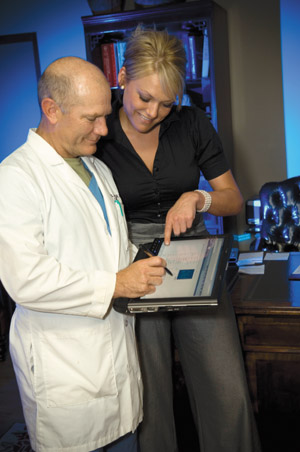 Hospital errors have been making headlines lately, particularly when it comes to medicating patients. A March study by United States Pharmacopeia, a nonprofit agency that monitors pharmaceutical use, found that surgical patients are three times more likely to experience a harmful medication error than other patients in the health care system. One of the main reasons cited is that no single person is assigned to track patients' medications during the surgery process, meaning paper charts sometimes get lost in the chain.

Glenn Jumonville of Lafayette experienced these paper-trail problems firsthand. When his daughter was born with spina bifida, he dealt with numerous New Orleans physicians handling her condition. Three times in a row, the hospital lost his daughter's charts, leading to Jumonville's repeated recitations of her medical problems to specialists. "I'm a professional and I needed to make money, and it would take hours to explain to the physicians what was going on," he says.

This experience compelled software specialist Jumonville to launch a technology company. After the dot.com bust, he started his own business in 1999 called iMod Inc., an e-business development company. Through research he discovered that the medical industry was moving toward a paperless system, including electronic medical records. That led to the formation of iMed Software Corporation in 2001.

While Jumonville had plenty of technology experience, he had none in the medical field. He enlisted the help of a friend, Dr. Peter Abel of Cardiovascular Institute of the South in Morgan City. Jumonville followed Abel around his clinic, trying to grasp what technology physicians needed to make their practices run more efficiently. After drafting an idea on paper, Jumonville presented it to his in-house computer programmers, who fine-tuned the software. In 2003, iMed signed up its first client, Dr. Daniel R. Bourque of Lafayette.

iMed's electronic medical records software is geared more toward the clinical side, rather than the financial side, of a medical practice. "We provide tracking for all of the patient's information, maintain the patient's health, maintain the drug list, and even record the prescriptions," explains project/marketing/operations manager John Credeur. "It's all based around a patient information system."

From the time patients check in, iMed records their progress. Before examinations, medical records are scanned into the doctor's system. When a patient arrives, the receptionist keys in his/her name, which shows up in black on the computer screen. From that point, the patient goes to another terminal where a nurse takes a medical history. As soon as the nurse enters the patient's information, the examining physician receives it in real-time on a laptop. With a touch of a mouse, the doctor can instantly view the patient's medical history, medication regimen, lab results, past visits, and other key data without having to shuffle through stacks of papers.

After examining the patient, the doctor enters the progress note into the electronic record and sends the diagnosis and treatment instructions instantly to the checkout station. Prescriptions are either electronically transferred to a pharmacist, or printed for patients to take with them. Once patients have finished, their names change to red on the receptionist's screen.

"What we tried to do was to take technology that would make it easier for a doctor to walk into the office and get examinations done faster than he could before," Jumonville says. "So, it is cutting down the paper flow."

Over the past few years, public programs like Medicare and private insurance companies have drastically cut reimbursement rates, and doctors have to see more patients in order to make the same amount of money. At the same time, the government is pushing to eliminate medical mistakes in diagnoses and medications. Medical software addresses both of these problems by improving speed and accuracy in physicians' practices.

"In essence, iMed software will make the physician smarter, which is hopefully going to help the patient," Jumonville says. "From a public standpoint, it's about improving the care and accuracy of the information, and hopefully, driving down the cost of health care. The public should be forcing this, because it is going to improve care, it's going to cut down on mistakes, and it's going to drive their costs down."

Local hospitals using medical software are already noticing improvements. Both Lafayette General Medical Center and Our Lady of Lourdes Regional Medical Center use technology provided by Cerner Corporation. In the four years since LGMC has implemented the system, its staff reports a decrease in medical mistakes. "We are seeing an overall decrease in medication errors, for the simple fact that communication is greatly improved," says Al Patin, LGMC's interim chief nursing officer.

Another benefit from the software is a decrease in costs. "We are recognizing decreased costs and increased revenue, because we have an automated system," observes Edwina Mallery, manager and clinical coordinator of information systems at LGMC.

Lourdes installed the Cerner system this year but is already receiving positive feedback from employees. Through the software, Lourdes is able to share information with its sister hospitals, Our Lady of the Lake Regional Medical Center in Baton Rouge, St. Francis Medical Center in Monroe and St. Elizabeth Hospital in Gonzales. "Everybody has the information at hand," says Nona Mire, Lourdes' director of information systems. "For instance, if one person puts in the fact that a patient has an allergy, then everyone else in the institution who needs the information immediately has access to it, rather than having the chart following a patient around. That's just one small iota."

Mire notes that the system has also saved money for the hospital. "Sharing the same computer system with the sister hospitals saves us in costs," she observes. "You have a lot less people that have to maintain that hardware."

Every month or so, iMed's support staff visits clinics to evaluate how the system is working, and the company constantly updates its software to accommodate physicians' requests. "That's where we get some of our best development ideas," Credeur says. "A real big key for us has been getting in there and listening to the physicians and staff members, and saying, 'What can we do to make this better for you?' We want happy clients, and we want software that's working well."

Since installing the first system in 2003, iMed's business has skyrocketed. The software company now has about 65 physicians using the system from Lake Charles to New Orleans. Recently, LSU's residency program and Lake Charles Memorial Hospital purchased iMed's software. The company is receiving out-of-state inquiries from as far away as Las Vegas and North Carolina.

The company's next step is to provide a free online service that will enable the public to maintain an online health record. This electronic health record, called a "patient portal," will be accessible through an online Web site ' EHR Passport. "This basically will be a patient's medical passport," Jumonville explains. "Wherever they go, the information will follow. It's all Internet-based, and it will be secure."