Study after study appears to extol the health benefits of red wine, but local dietitians still don't buy the hype. 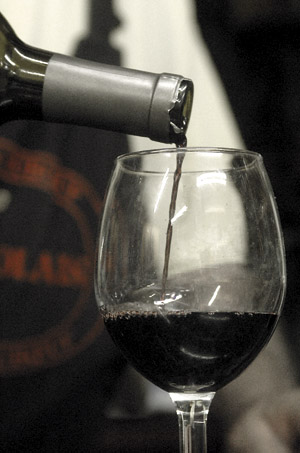 In 1991, iconic television news show 60 Minutes got corks popping with a report showing that France's moderate consumption of red wine contributed to lower heart disease rates for the French, despite a lifestyle filled with cigarettes, rich cheeses and cream sauces.

In 1992 Harvard researchers touted red wine as one of the "eight proven ways to reduce coronary heart disease risk."

In 2001 the Centers for Disease Control and Prevention said it could lower the risk of stroke.

In 2003 the American Journal of Gastroenterology found evidence that it reduces ulcer-causing bacteria.

The following year Harvard Medical School said it has anti-aging effects, while Australian researchers determined that it may decrease the risk of ovarian cancer.

All signs pointed to the same conclusion: a glass of red wine a day really does keep the doctor away.

But local dietitians still aren't quite ready to embrace red wine as a health food, saying it's not so much the wine as the grapes it's made of that have the potential to improve a person's well-being. "It looks like the major benefits first come out of the grape skin itself and the seeds," says Kate Rountree, a dietitian at Southwest Surgical Weight Management Center on Southwest Medical Center's campus. It's the antioxidants, called flavonoids, that pack the most nutritional value, she adds.

In particular the antioxidant resveratrol, which is prevalent in grapes' skin, might inhibit tumor development in certain cancers and aid in the formation of nerve cells, which scientists believe could be helpful for diseases like Alzheimer's and Parkinson's, according to the Yale-New Haven Hospital's online publication Nutrition Advisor. Dryer reds pack the biggest flavonoid punch with Cabernet Sauvignon, Petit Syrah and Pinot Noirs having more than merlots and red zinfandels. White wine has the least amount.

Despite the long list of studies that appear to extol wine's virtues (white wine is gaining traction as well), Rountree points out that those studies have yet to show a definitive link between wine and better health, saying she finds the word "may" in just about every one she reads. "It may boost your good cholesterol, which is HDL. It may help to lower your bad cholesterol, which is LDL," she says. "Actually, it may help to prevent LDL from forming."

Lafayette General's Nutrition Services Supervisor Rosalind Allen agrees. "People tend to take it at face value, but for every study that says yes, there is another one that says no," she says. "There haven't been any studies to positively correlate it," she continues, "but they also can't say it doesn't."

For any non-drinker, there is certainly no reason to rush out and buy a wine decanter. "No studies suggest that people start drinking," Allen says. "That's the No. 1 disclaimer you'll see on every study." Local health experts say people would get the same benefits from grape juice made from dark red grapes and a diet that includes exercise, fruits and vegetables and whole grains.

The concern, says Allen, is that people who have health conditions may be easily swayed by the studies. Even a recommendation that it's OK to consume a moderate amount of wine is limited to individuals with a clean bill of health, she says. Many medical and social conditions are exacerbated by alcohol. "It can have the reverse effect," she warns. Pancreatitis, liver disease, certain cancers, hypertension, depression and heart disease may be worsened by alcohol. Other studies suggest alcohol consumption is associated with cancer risk, may increase triglycerides and result in weight gain because of its empty calories.

The one consistency in each study is that a single serving of red wine (one 4- to 5-ounce glass for women and two glasses for men) is all that's recommended on a daily basis. And even if the wine is not as healthy as the studies suggest, a 5-ounce glass a day isn't enough to adversely affect an able-bodied person. But three or four glasses might. So once that single-serving line is crossed, any advantages can be far outweighed by the negative effects of alcohol. Additionally, some people mistakenly think they can drink a week's worth of wine in one night and get the same benefits. "Let's say you don't drink during the week," Rountree says. "That certainly doesn't mean you can stockpile four or five glasses you missed on Friday night."