After its inaugural sellout crowd last year, Gulf Brew looks to follow up on its initial success with a bigger space and more beer. 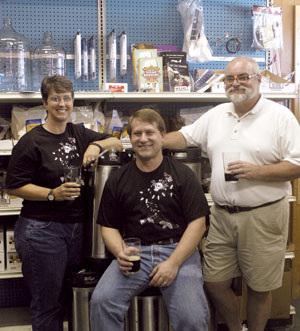 Members of the Dead Yeast Society ( pictured from left: Julie Nelson, Gene Nelson and Kevin Shearin) will be on-hand for Gulf Brew to help serve up more than 100 gallons of homebrewed beer.

Beer is powerful enough to draw a thousand Lafayette strangers out into the heat to a downtown parking lot in the middle of July. That’s what Rose Courville learned last year.

As curator and events coordinator for the Acadiana Arts Council, Courville planned an event devoted to beer in conjunction with the Southern Open exhibition. “I was astounded that we had so many people.” she says. “But somebody said to me, ‘You used the word ‘beer.’ It’s Lafayette. What did you expect?’” What she anticipated was about 400 people, but those expectations more than doubled with 1,000 people in attendance.

Gene Nelson, of the local homebrewing club the Dead Yeast Society, says he and his co-horts brought 20 gallons of homebrewed beer to last year’s event, five more gallons than requested. “Everyone, the commercial brewers and us, ran out of beer three hours into a five-hour event,” he says. This year the club was asked to prepare for 2,000 people and to bring 50 gallons of beer. “So we’re planning on bringing double the amount,” Nelson says. “We won’t be the ones who incite a riot when people have paid for their entry and can’t get beer.”

There shouldn’t be any shortage of beer or space this time around.

Last year’s event was held in the parking lot of the Acadiana Center for the Arts under a 3,200-square-foot tent. This year’s Gulf Brew has moved to Parc International under an 8,000-square-foot tent. And in addition to the Gulf coast breweries in attendance last year — Abita Brewing Co., Heiner Brau, Lazy Magnolia and Zea — local beer distributors Shilling Distributing, Glazer’s Wholesale and Crescent Crown Distributing are also pitching in. Five sampling booths have mushroomed into 19, with 450 gallons of beer on tap and more than 60 different styles of beer to sample.

Jeremy Theriot, Schilling’s specialty beverage manager, says his company carries in excess of 130 brands of beer, and 16 of those will be on tap for Gulf Brew. Schilling distributes beer to six parishes, from Opelousas to New Iberia and Butte La Rose to Eunice. “We’re a big beer market,” Theriot says, noting that the majority of bar sales in Acadiana is beer. The U.S. is the largest beer market in the world, and half of the nation’s beer sales go to Anheuser-Busch, the makers of Budweiser and Schilling’s core brand.

On Monday, the St. Louis-based brewer of the King of Beers announced that it had agreed to a $52 billion takeover bid from the Belgian brewer InBev, which will create the world’s largest brewery. InBev’s brands already include Beck’s, Stella Artois and Bass. But the Bud brand will serve as the company’s flagship product.

While there is a slight uptick in sales for specialty and craft beers, the American staples fuel the beer market. “We enjoy participating in Gulf Brew because we want to promote beer,” Theriot says. “The more people we can get to drink beer, the better off we are. We’re a beer company, and if they’re drinking beer, we have the opportunity to gain their sales.”

It may be difficult to sell Nelson and his Dead Yeast friends. Nelson began brewing his own beer a couple of years ago because of his inability to find locally the styles of beers he enjoys drinking. “American beer is designed for the mass market so that it doesn’t offend anyone,” he says. “I really enjoy the Belgian styles and the old German styles that just aren’t popular in America. But honestly they are becoming more popular now.”

Homebrewers contend they brew beer superior to those commercially available and say the difference between their brews and one from the store shelf is the difference between a tomato from the garden and a tomato from the can. “I can make much better beer than I can buy,” Nelson says. “I’m not constrained like a commercial brewery is in the quality or quantity of my ingredients. In smaller batches I can afford much higher quality materials.” It takes about five hours of labor, two cases of empty 12-ounce bottles and a month’s worth of patience to brew up five gallons of beer, but, says Nelson, “I brew beer when I’m relaxing. I don’t consider it work.”

Kevin Shearin of Marcello’s Wine Market says there are more than 110 gallons and over 13 varieties of beer resting in kegs in the walk-in cooler at the liquor store. “Knowing the way all of these guys brew, it’s all going to be good,” Shearin says. There are 20 gallons alone of an apricot wheat beer.

“The Dead Yeast Society is for people to have fun,” says Shearin, “but it’s also a chance to exchange ideas and become better brewers and introduce potential brewers to it.” At Gulf Brew, the club will tap into and serve up eight of its homebrewed beers — including white chocolate wheat ale, pale ale, amber, heifenweizen, porter, India pale ale and Bavarian wheat.

Courville says ticket sales are limited this year, and that breweries are prepared to have samples ready for up to 2,000 people. “We’re doing limited ticket sales,” she says. “We’re not going to run out of beer this year. People need to buy their tickets early and get to the event early.”

And despite the endless debates over the commercial brews vs. homebrewed beer and great taste vs. less filling, Gulf Brew presents an opportunity to sample the variety of beers flooding the market, in addition to the old tried and true favorites.

Says Nelson, “Not only is it a way to help out the arts council, but it’s also a way to introduce the rest of the American public to different types of beer out there.”

Gulf Brew 2008, presented by the Acadiana Center for the Arts, takes place at Parc International in downtown Lafayette on Saturday, July 19. Sampling of more than 60 beers runs from 4 until 8 p.m. A taster ticket of $15 gets you 15 samples of beer. Admission without samples, a non-taster ticket, is $10. At 8 p.m, the event becomes free with music from the TBC Brass Band until 10 p.m. For more information, visit www.gulfbrew.com.

The Dead Yeast Society homebrewing club meets every first Tuesday of the month at Marcello’s on Johnston Street in Lafayette. For a complete schedule and more information about the club and homebrewing, visit www.deadyeast.com.