Local experts say limiting the time you spend in ultra high heels and flip flops, along with lots of stretching, can go a long way toward avoiding foot injuries that really cramp your style. 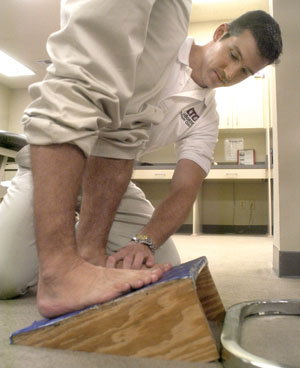 When Milton "Mitt" Fuqua took up running two decades ago, he started off slowly with a 5k race ' then got hooked. Within 10 years, he had aspired to a new goal ' his first marathon. But, while training for this event, he suffered an unexpected setback, a condition known as plantar fasciitis, a painful inflammation of the ligament connecting the heel bone to the toes. He spent months in physical therapy, popped anti-inflammatories, and finally ended up in a night splint for six weeks. That hard, plastic boot did the trick, and Fuqua was finally cured. "I think the splint was the thing that did the most good," he says.

But athletes aren't the only ones who suffer from debilitating foot injuries ' the kind that hamper not just a person's exercise regimen but also his or her overall quality of life. Local experts say a few lifestyle changes can make a big difference in the health of your feet.

Even trend-setting fashionistas, who spend their days coolly preening for the cameras in sky-high heels, are plagued with foot problems. Recently, fashion icon Sarah Jessica Parker, who played the Imelda Marcos-inspired Sex and the City character Carrie Bradshaw, tore tendons in her foot while stumbling down the street in stilettos.

So, are the stylish new 4-inch heels worth the price of pain? No way, says Jeff Mentel, physical therapy director at Laborde Therapy Center. He identifies two categories of problems caused by high heels ' immediate and long-term. The immediate conditions include sprains and fractures from rolling ankles, particularly from spike-heeled stilettos. A common misconception is that wide heels are safer. "Wider heels are a little bit deceptive, because though they may give you more stability laterally, women tend to get fooled by that, and think that they are OK for them," he says. "So, they end up wearing them all day long, rather than taking them off during the day to let their legs rest."

High heels can also cause toe deformities, such as hallux valgus or bunions, hammer toes, and corns. They can even trigger nerve compressions. "The problem with high heels is that most of them are narrowed at the forefoot, which narrows the toes and pushes them together," explains Dr. Peter D. Vizzi, a local orthopedic surgeon. "This causes toe deformities, but also nerve compressions, called neuromas."

A common consequence is Morton's neuroma, a thickening of tissue around the nerves of the foot, commonly between the third and fourth toes. This condition causes pain, stinging, burning or numbness. "The pressure on the forefoot puts a lot of pressure on that nerve, causing it to swell and produce a lot of pain, discomfort and inability to walk much," Mentel explains. "It is going to vary by other factors, such as a person's weight and activity level."

Over time, conditions can become more serious, leading to arthritis, tendonitis and collapsed arches. "When women get out of the high heels and go back into more of a flat, they can start getting some collapsing of the arches, as well as Achilles tendonitis," explains Dr. James A. Noriega, a podiatric physician and surgeon. "It just depends on how high of a heel they are wearing. Higher heels tend to shorten the Achilles tendon a little bit quicker."

Long-term wear of high heels could lead to serious complications requiring surgery. "The deformities can lead to the possibility of surgery to correct them if they get to a point where they are continually painful or cosmetically displeasing," Vizzi says.

Experts say the key is to wear fashionable shoes only as needed. Noriega suggests wearing heels no higher than an inch and a half. But, he realizes that people have work and social obligations where they need to look stylish. "I tell my patients to wear high heels only when they need to, such as for weddings, funerals or other activities where they need to be dressed up," he says. "I've seen women working out in high heels, and I really don't recommend that at all," he jokes.

Vizzi suggests keeping an extra pair of shoes in the car. "If you are at an event where you just have to wear high heeled shoes, try to put a pair of comfortable shoes in the car, and do everything else you can do out of the high-heeled shoes," he says. "Obviously, it can be a time-related problem, so the less the time you spend in the heels, the better off you'll be in the end."

But it's not just high heels causing foot pain. On the other extreme, health care professionals are also seeing increasing numbers of injuries from another kind of footwear, flip flops, a big trend in the blistering-hot South. What appears to be a comfy shoe can cause a host of complications, says Noriega, noting that the main long-term problems occur from the lack of support. "If you are walking on concrete with flip flops, your foot is taking the whole brunt of the walking, versus your shoe taking some of the force," he explains. "So, we'll see a lot of arch pain and a lot of heel pain. Wear them to the beach, to the pool," he says. "Don't go shopping in your flip flops. And, don't wear them all day, every day."

The leading complication from extended flip flop wear is plantar fasciitis, the same condition Fuqua suffered while training for his first marathon. With this condition, people tend to have morning pain with the first step out of bed, as well as pain when getting up after any period of extended sitting.

Noriega initially treats plantar fasciitis conservatively with anti-inflammatories, lots of stretching and arch supports. Mentel employs a treatment regimen where patients start the morning in bed with a heating pad on their foot for about 10 minutes, then roll their foot back and forth on a can on the floor, and finally place a belt around their toes and hold them back with their hands to stretch out the calf muscles. More advanced treatments include injections, physical therapy, night splints and even surgery.

Risk of foot injury shouldn't deter anyone from high-impact workouts, but before you hit the pavement, invest in quality running shoes, advises Vizzi, himself a runner. He advises buying a comfortable, wide-toed running shoe that is not too tight and cautions all runners against doing too much too soon. "The running shoes tend to be wider, and usually do not cause the forefoot problems that some of the attractive shoes produce," he says. "People who go from not running to running six miles a day in a very quick time frame can get things like shin splints and tendon injuries that really will set them back quite a bit," Vizzi observes. "We see a lot of people who go from nothing to trying to overdo it, and really injuring themselves."

Mentel notes that people should first recognize what they want to accomplish ' long distances, short sprints, weight loss, or cardiovascular improvement. That will determine your training program and shoe type. "Any serious runner will know that first of all, running is an art, and there are different types of running," he says.

Before starting to run, Noriega recommends a good walking program. Aspiring athletes can gradually add jogging, then graduate to full-fledged running. Vizzi suggests starting slowly, then doubling distances every week. For example, a beginning runner can start with half a mile, double that to a mile the following week, double that to two miles the next week, and so on.

To avoid injuries, Noriega recommends checking feet after every jaunt to make sure that no blisters or pre-blistering areas, called "hot spots," are forming. "And making sure that their shoes fit appropriately ' that's the best advice," he says.

Those who have suffered a major injury say the fear of not being able to exercise ' and in some cases not even walk without pain ' scared them into paying close attention to the health of their feet. Just ask Fugua, who takes time every day to stretch his feet and makes sure his shoes are the perfect fit. "I have not have had any problems since," says the now avid runner, who has completed several marathons and more recently is venturing out into triathlon competitions.