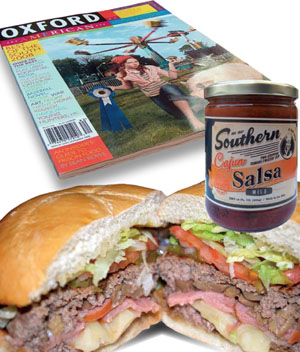 GET STUFFED
Forget about toppings and side orders. Brewski’s, the newly opened bar and grill at 5503 Johnston St. near Ambassador Caffery, packs a full meal inside your sandwich. Burgers are inverted with a savory layer of toppings folded inside a half-pound patty, ensuring you get all the goods in each bite. Try a burger stuffed with boudin and pepper jack; the stuffed sausage, mushroom and swiss burger (pictured); or the Broadmoor, which comes packed with crushed Fritos corn chips. Brewski’s also offers baked potatoes with stuffings like shrimp étouffée, as well as philly cheese steak po-boys packed with roast beef, mashed potatoes and gravy. Daily plate lunch specials and salads round out the menu. The kitchen stays open from 11 a.m. to 2 a.m. Monday through Saturday. For more information, call 456-3873. — Nathan Stubbs

BEST OF THE SOUTH 2008
Since its launch in the 1990s, Oxford American magazine’s mission has been to present the South through the eyes of its most talented writers, artists, photographers and musicians, and OA’s summer Best of the South 2008 issue is no exception. The 146-page beauty contains odes to Pete Maravich, boiled shrimp, and Bryan Leboeuf’s “Trois Bateaux” and “On the Road” paintings. A companion DVD, besides including iconic footage from Elvis Presley’s 1968 comeback special, also features a segment from local filmmaker Zack Godshall’s Low and Behold, his post-Katrina film about an apprentice insurance adjustor. OA’s Best of the South 2008 retails for $6.95 and is available locally at Barnes & Noble and Books-a-Million; subscriptions are available through www.oxfordamericanmag.com. — Scott Jordan