The Hellboy sequel boasts fanciful and fascinating new creatures — but not much character. 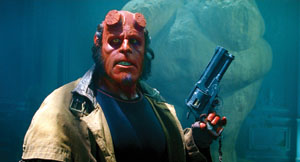 Sidelined in his own sequel, Hellboy (Ron Perlman) fights to prevent a war between worlds.

A towering, fierce Angel of Death crouches in a hidden cavern, awaiting each man (and beast) in his time. This higher being has an empty face, rows of unblinking eyes lining the fringes of his feathered wings. He sees the future and the past, standing almost always apart, sidling up to supplicants only to whisper promises and prophecies.

A man dissipates into ectoplasm, surviving in a special suit designed to contain his gaseous state. The German lost corporeal form long ago, giving up his body in a tragedy not told, his heavy accent one of the only remaining traces of the man he once was. He occasionally escapes the confines of his borrowed body to enter things and people, using his ectoplasmic strength to control and subordinate them.

Ivory-skinned, white-haired twins know each other’s thoughts and feel each other’s physical pains. The remaining scions of an elven kingdom long thought extinct, the brother and sister know the secret of the Golden Army, an indestructible fighting force assembled by their father to his ultimate regret, an army of dread that has slept long enough to become the tall-tale legend of a child’s bedtime story.

A plant creature called an elemental sprouts in the heart of the city, growing from a magic bean into a garden Godzilla. Its green tendrils wave like octopus arms, crushing cars and creating chaos. Finally, reluctantly, felled by a scarlet son of the underworld who recognizes it as the last of its kind but knows he must stop its rampage, the elemental relinquishes its uncomprehending rage. The dying giant carpets the harsh asphalt with forest undergrowth and a flurry of delicate flowers.

Each of these inventive, carefully crafted creations deserves its own detailed mythology. Director Guillermo del Toro (Pan’s Labyrinth) uses them all — and dozens more — to populate his much-anticipated sequel Hellboy II: The Golden Army. The most exciting imagination working in movies today has officially run wild. Hellboy II looks like it was a whole lot of fun to make (and to make up); too bad it isn’t as much fun to watch. The main attraction — Hellboy himself — becomes an also-ran, and his signature sass seems adrift in the romance and poetry of Del Toro’s larger vision. (Hellboy’s not The Hobbit, but it sure feels like a warm-up at times.)

Nothing and everything has changed since we last saw Hellboy (Ron Perlman). The Nazi-summoned, Allied-rescued demon still munches on candy bars, croons to his pet kitties and longs for full-fledged freedom in the outside world, beyond the confines of the Bureau for Paranormal Research and Defense. He still speaks sarcastically and carries a big gun (and packs an even bigger fist). But now that he’s got the love of his life, Liz (Selma Blair), tending the home fires (literally — fire is her freakish power), he’s entered foreign territory. He still relies on fishy friend Abe (now voiced by Doug Jones instead of David Hyde Pierce) for smarts and companionship. But now, Hellboy finds himself trying to stop a war between his kind and humankind. In order to save the humans he longs to be accepted by, he must kill off outsiders very much like himself: an elven prince (Luke Goss) with a centuries-old grudge and the menagerie of misfits he controls.

Del Toro and Labyrinth’s Oscar-winning cinematographer Guillermo Navarro create another magical world here, but perhaps too magical. The fairy-tale extras revolt and take over what should be the main narrative, the next step in the struggles of a human-loving demon spawn who is in this world but never of it. Consigned to secondary status in his story, Hellboy becomes more like Heckboy. He’s an afterthought, a bit player, no longer the most fanciful, fun thing around. It feels like Del Toro, who also wrote the script with comic-book creator Mike Mignola, wanted to make another movie and had to shoehorn in Hellboy because he was his ticket to ride. The closest we get to a glimpse of our gruff and grumpy hero is a post-fight bender with Abe, the two of them swilling Mexican beer and belting out Barry Manilow. It’s far too little and feels strangely out of place.

Del Toro has the best of intentions. He lives in a James Whale world where monsters aren’t monstrous — they are just misunderstood. He seems to have forgotten, however, that he already had a case study in the horned, unpredictable Hellboy. He overshadows him, placing him in troll markets that make the Star Wars cantina crowd look like the gang at Cheers. And so the sequel passes by its eponymous avatar, fickle as a crowd of ungrateful onlookers saved from destruction but moving on nonetheless to the next new thing.