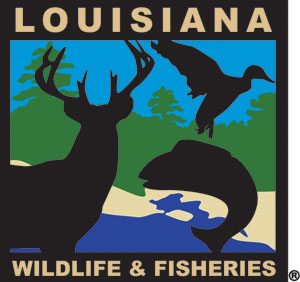 If you’re an avid hunter, concerned conservationist or obsessed angler, then you can summon the long-held logo of the Louisiana Department of Wildlife and Fisheries from memory. It’s round, for starters, with an antiquated image of a deer surrounding by miniature crab, rabbit, quail and bass, as well as other Bayou State critters, all in black and white with muted color tones for the animals.

Well, forget about it. At last week’s meeting of the LDWF Commission, a new logo was unveiled. The coastline of Vermilion Bay and its cypress trees were the inspiration and it’s depicted by a bright blue sky and water breaks set against vivid greenery. It also includes silhouettes of three major species managed by LDWF: deer, waterfowl and fish.

The new logo is meant to be a simpler version that represents the vast Louisiana outdoor landscape, said LDWF Secretary Robert Barham. It likewise serves as a visual representation of the department’s evolution, he added. “The old logo served us well through many generations,” Barham said. “The new logo is a bold symbol of the conservation mission we are responsible for overseeing.”

LDWF will be using the new logo on all future projects, publications, programs, signage, trucks and other department objects. The department’s public information office researched and designed the new logo with input from local graphic artists, marketing and advertising firms (including Lafayette's Graham Group) and LDWF employees.