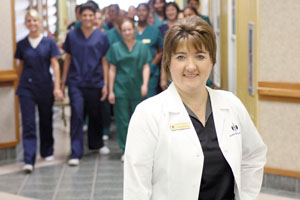 While working as a health care instructor in Lafayette, Ginger Barras saw a void in health care training opportunities in the New Iberia area. In May she opened the Academy of Acadiana, a venture that has taken off quickly in light of the Acadiana region's bustling health care industry.

"There was a demand here in New Iberia," says Barras, who worked for six months to get the school licensed by the Louisiana Board of Regents and now serves as its director. Located in a former retail space on Main Street next to the Greater Iberia Chamber of Commerce, the site is ideal for the training facility. "People think we built this just for the school," she says. "We have seven classrooms with the ability to take over more space, which we're planning on doing by the end of the year."

The academy offers training courses for dental assistants, medical office assistants, EKG technicians and phlebotomy techs (those who draw blood) and hopes to expand it course offerings. "We are working on a number of curriculums," says Barras. The first session ended in August, and the response has been overwhelming. "My next sessions are all maxed [out]," she notes, and the next available openings are in October.

The academy is pulling from Houma, Morgan City and other communities down U.S. Hwy. 90, as well as the Kaplan, Erath and Abbeville areas. "We also have several students from Lafayette," says Barras, who lives in Delcambre.

The EKG program, which is enrolling now for its first session in November, is a four-week curriculum that costs $1,500. The others are 10-week programs ' eight weeks in the classroom and the last two in a clinical setting ' that cost $2,100. To qualify, students need a high school diploma or a GED and a minimum score on the entrance exam.

In January the academy will introduce evening sessions for all curriculums, a demand created by working people looking for a career change.

Geneé Broussard was living in Lafayette and waiting tables in New Iberia when her mother told her about the academy. Broussard's great grandfather and grandfather were dentists, and she had done a short stint as an orthodontist's assistant, work she really enjoyed. "I knew I needed more training, and [the academy] offers hands-on experience," she says. Before the training session was over, Dr. Tony Soileau's cosmetic dentistry practice in Lafayette offered Broussard a job. "I actually finished early because I'd received a job while still in school," she says. "I completed my clinicals early [with Soileau in the afternoons after class]."

Broussard says the academy's staff was very supportive during her application process. "They really made the door wide open that I could do this," she says.

Though Broussard was certain she wanted to be a dental assistant, many of the students who stop by aren't sure which health care avenue they want to pursue, so Barras ' who has a decade of experience as an instructor ' helps guide them in the right direction. "When they come in, we like to sit down and go over all of their options. We encourage them to come in and tour all of the areas. They can see all the dental instruments, all the surgical instruments. It's a good way to decide."

The school de-emphasizes textbook learning in favor of a more hands-on approach, an effective teaching tool Barras believes the students also prefer. "They want to touch it and feel it," the director says.

The medical community has also been supportive, providing jobs for a high percentage of the students before they even complete the sessions. Says Barras, "The docs are very excited because they don't have to take out an ad [when looking for workers]. They just call the school."