Unaware of the short and long-term effects on their kids' health, some parents think it's OK for teens to drink alcohol. 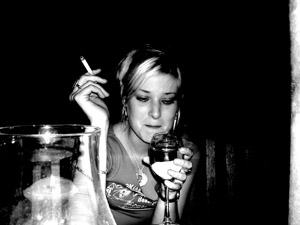 Louisiana, perhaps more so than any other state, promotes a lifestyle that condones alcohol consumption ' in particular heavy drinking ' as part of its joie de vivre culture. But when that way of life extends to a parental endorsement of underage drinking, mounting evidence shows Acadiana could be raising a population of unhealthy teens.

It's no secret that many people begin using alcohol and other drugs during adolescence. After all, parents often allow their teens to drink; some even buy the alcohol for them. And while teenage binge drinking is slightly declining, dropping 1 percent in 2005, the majority of teens who drink don't perceive that there are health risks associated with the behavior.

That's the mindset despite the highly publicized 2003 death of an LSU student from alcohol poisoning after he consumed an entire bottle of rum in his off-campus apartment.

The University of Michigan's annual Monitoring the Future study found that in 2005 the proportions of 8th, 10th and 12th graders who admitted drinking an alcoholic beverage in the 30-day period prior to being surveyed were 17 percent, 33 percent and 47 percent, respectively.

Most parents recognize that alcohol poisoning (with typical symptoms like violent vomiting, extreme sleepiness, unconsciousness, difficulty breathing, dangerously low blood sugar, seizures and even death) can result from binge drinking. But they often don't stop to think about other factors, like that teens who drink are more likely to be sexually active and have unsafe, unprotected sex; that half of drowning deaths among teens are alcohol related; how alcohol use increases the chance of them being involved in a homicide. Or committing suicide.

And the long-accepted assumption that people can drink heavily for many years before suffering considerable neurological injury has been proven wrong in recent years.

Alcohol is a depressant that slows the function of the central nervous system, and because teens are still developing physically, they are particularly vulnerable, says Ken Benedik, a UL Lafayette health instructor. "Their brains are not fully developed yet, and as a result it halts the maturation process," says Benedik, who's also a licensed counselor and addiction counselor who treats teens in his private practice. "It's like their level of maturity stops at that point. You have a 40-year-old man still thinking like a 15- or 16-year-old."

One of the country's foremost researchers on the effects of alcohol and other drugs on youths, Duke University Medical Center Assistant Research Professor Aaron White, Ph.D., says there is growing evidence that alcohol affects adult and adolescent brains differently.

Heavy drinking among teens impacts more than just grades and social skills; preliminary data suggests that adolescents might be more vulnerable than adults to impairments following repeated alcohol exposure, according to White. The researcher says alcohol affects the adolescents' frontal lobes, which are critical to planning, decision-making and impulse control, and also points to evidence that the drug may damage the hippocampus, which is key to memory formation.

Unfortunately for local teens, cultures like that in Louisiana view drinking as "a rite of passage into adulthood," says Benedik, who believes there are a number of additional reasons teens may turn to alcohol. Those include pressures from society, peers and their parents, who put too much emphasis on excelling. "The pain it relieves is the pain of shame," he says. "Parents want their kids to succeed, but they often define success in monetary terms."

Additionally, adults sometimes have the "we grew up drinking, and we turned out all right" attitude, Benedik notes. And while it may sound trite and is no excuse for underage drinking, bygone days were simpler times, he insists. "The world is now more complex, and kids try to escape those complexities." Today's parents tend to focus too much on raising well-rounded, enriched children who will go to top colleges (when the students may favor attending a trade school) and in the process sometimes lose sight of the fact that kids just need to be kids. "Four or five guys going outside to play baseball, a Saturday afternoon baseball game, is different than being in a league where you have parents and coaches screaming on the sidelines," he says.

In his counseling practice, Benedik sees youths who might be enrolled in up to 10 organized activities and often asks them whether they would want to drop out of any. They "almost always" want to simplify their lives. "The other thing is it makes the parents' lives a lot less stressful," he adds.

Good communication is the key to raising children who will be less inclined to escape into a life of alcohol and drugs. "Kids talk to your parents, and parents talk to your kids. There'll be some drop off when they're teenagers, but the communication doesn't shut off," Benedik says, encouraging parents to accept that their teens are likely to mimic peers on TV by talking in sound bites.

To combat the problem locally, nonprofit education and counseling center The Family Tree is working with various community agencies, businesses and individuals as part of its Communities Mobilizing for Change on Alcohol initiative. CMCA is funded through the Lafayette Parish School System's Safe Schools/Healthy Students grant.

Lindsay Rogers, a social worker at The Family Tree and CMCA's co-coordinator, says the program aims to reduce 13- to 20-year-olds' access to alcohol by changing community policies and practices. In an effort to gain an understanding of attitudes about underage drinking and the extent of the problem, CMCA is conducting extensive surveys of adults and adolescents throughout the community. (For more information on CMCA and The Family Tree, call 237-2160.)

In Acadiana, the problem of underage drinking that often starts in the home is likely to find its solution in the same place, but Benedik does issue words of caution to parents. While he hopes parents and other adults realize the adverse effects alcohol can have on teens and their health, the counselor says safety should be a parent's first priority when dealing with a teenager who has been drinking. "The most important message is, 'If something happens and you have been drinking, call me and I will come get you. No questions asked. Just don't drive home.'"