A new initiative at the Louisiana Immersive Technologies Enterprise is part of a new push to make Louisiana a video game industry hub. 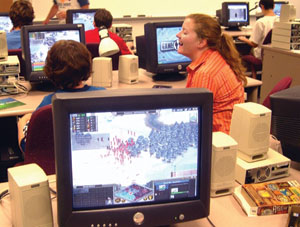 Spencer Zuzolo sees nothing wrong with sitting in front of a video game all day. He’s actually made a career out of it.

At his annual GameCamp, Zuzolo teaches local kids about the basics of the video game industry. In his travels across the state, he’s finding that it’s not just kids that are interested; business and political leaders are keying into the industry’s rising profile.  “People are starting to understand more and more why this is important,” Zuzolo says. “And so it’s just been snowballing.”

As director of Austin Community College’s Game Development Institute, Zuzolo first brought his GameCamp to Lafayette four years ago. He’s now set up more of a permanent base here because of the number of students wanting more than just a one-week tutorial. “That’s the real reason I came to Louisiana,” he says. “I have all these [GameCamp] students and these parents who tell me this is exactly what these students need and what they want. That motivated me to accelerate what we were doing with 3-D Squared and broaden it to be more oriented toward training and education.”

Through his nonprofit, 3-D Squared, Zuzolo is now hoping to help the state build its digital media industry from the ground up. This fall, 3-D squared is partnering with the Louisiana Immersive Technologies Enterprise in Lafayette to set up a lab for game industry workforce development. The initiative is being funded through a $750,000 grant from Louisiana Economic Development recently approved by the state legislature.

“You can’t talk to a teenager today who doesn’t understand the digital game industry on some level,” says Republican state Rep. Page Cortez. “Even if it’s just that they played NCAA Football ’07. They all understand it at some degree. What I became aware of is that the programming side of that is a huge breakthrough industry. And the question to me was: why not Louisiana? And if Louisiana, why not Lafayette, especially when we have a place like the LITE Center that’s a perfect incubator for that?”

Cortez, along with Republican state Sen. Mike Michot, was a key supporter of 3-D Squared’s grant, helping to shepherd it through the legislature. Originally, 3-D squared requested $2.5 million for its workforce development project — a figure that was scaled back by LED, which also has a number of other digital media initiatives it is funding. Zuzolo says because of the cutback, it will not be developing an online component to its coursework that was originally planned. Regardless, he says the investment shows the state is committed to building its game industry.

LED Secretary Stephen Moret says the program at LITE is just one of several state initiatives designed to build the digital media industry — an industry that he began targeting in his previous job with the Chamber of Greater Baton Rouge. “This is one of the industries about which we’re most excited as an agency and about which I’m personally excited as well,” he says. A 2005 study Moret helped commission while with the Baton Rouge Chamber, titled The Next Big Thing, outlined how digital media was a $30 billion annual industry, outpacing both the movie and recording industries in the entertainment sector.

“We’re not really just talking about casual video games,” Moret says. “It also involves simulations and military applications. This is an industry sector with massive potential, an industry sector that, as big as it is, is still in a lot of ways in its infancy. It’s got years and years of double-digit growth ahead of it, and I think our state has the potential to be a major player.”

States are beginning to aggressively compete in recruiting game companies, which are prized for high-paying, permanent jobs. LED has announced it will be hiring seven new staff members in its Office of Entertainment Industry Development, two of whom will focus solely on digital media. In 2005, the state passed lucrative tax credits — modeled after its successful movie industry tax credits — to assist game companies setting up shop in-state and began marketing itself to the industry through events like the International Red Stick Animation festival in Baton Rouge. Zuzolo says workforce development will complement those efforts. “The question is not really does the state have the talent, the question is does the state have a strategy to do it in a way that makes sense that can compete with the other states that are doing these kinds of things.”

Other workforce development initiatives also are underway. LSU is spending more than $2 million this year to develop an inter-disciplinary digital media curriculum. LSU Shreveport also has plans for a curriculum, as does Baton Rouge Community College. Zuzolo is currently working with Nicholls State University and Carencro High School’s Academy of Information Technology in developing course work.

With the new initiative at LITE, 3-D Squared will be charged with developing an industry standard curriculum for schools to implement, hosting training seminars and performing an assessment of existing resources in the state that can be geared toward video game production. Zuzolo has recruited a 13-member working group for the project, made up of industry professionals and educators from across the country. Local partners include officials with LITE and UL.

“Spencer has contacts at video game companies all over the world,” says LITE’s Chief Operating Officer Henry Florsheim. “We’re going to be able to tap into his expertise to bring in industry leaders that can help the students here really learn the industry the way that it needs to be learned and that will allow us to help create the workforce to do video game development work in the state long term.”

LITE is currently negotiating a 12-month lease with 3-D Squared and its office should be up and running within the next couple of months. After that time, Florsheim says all the partners will reassess to see if the video game lab could become a permanent fixture at LITE. “In general,” Florsheim says, “LITE’s mission is to provide access to technologies that companies and individuals don’t have the capacity to access on their own. Whether it’s the technical artists or our experts in 3-D projection, our staff here is going to be part of those things at times to make sure that the business community understands how to get involved and how to learn more.”

Moret says the digital media programs and initiatives that are successful stand to see further investment from the state. He also adds that Lafayette, with assets like LITE, is one of the areas poised to benefit from the emergence of a robust digital media industry. “Acadiana is one of the hottest regions in Louisiana today and has made investments to be a leader in the technology area,” he says. “So when I think about what digital media companies and their staff are looking for and what markets in Louisiana have the potential to attract them, I really think Lafayette is right at the top.