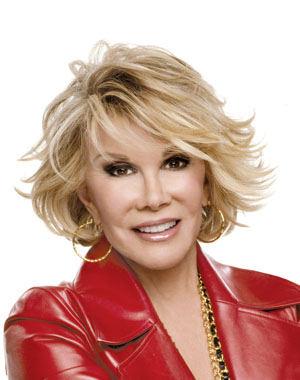 “This face has seen more knives than a Benihana! Am I smiling? I can’t tell. I can’t feel my face.”

In legendary comedienne Joan Rivers’ new television ad campaign for Geico, Rivers displays one of her greatest comedic assets: her self-deprecating humor. The 70-year-old Rivers has undergone so much plastic surgery that there’s nary a line on her face, but rather than let it become fodder for other comedians, Rivers lampoons herself to her own advantage.

In the male-dominated world of comedy, Rivers’ ability to poke fun at herself helped her become one of the most famous comics of the ’70s and ’80s and earned her the title of permanent guest host for Johnny Carson on The Tonight Show. Her star dimmed after she left The Tonight Show for her own short-lived talk show, but she revived her career — and attracted a whole new generation of fans — when she staked out a spot on the red carpet of the Oscar Awards. In her role as fashion critic for E! Network and TV Guide, Rivers screeched away with her nasal Long Island accent, mercilessly skewering A- and B-list celebrities’ clothing and style sense. And when she wasn’t mocking the clothes people are wearing, she’s a one-woman wrecking crew of taboos, touching on race, sex, ethnicity and whatever else pops into her head.

Behind the scenes Rivers does charitable work, lending her time to the Cystic Fibrosis Foundation and Guide Dogs for the Blind. Her Heymann Center appearance this weekend benefits Stuller Place, but don’t expect Rivers to tone down her act for the occasion: the performance is strictly for adults only.