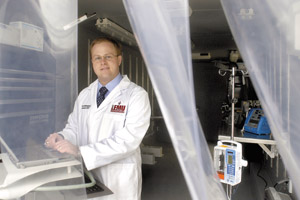 Last year, in the aftermaths of hurricanes Katrina and Rita, the Mystick Krewe of Louisianians took a rare hiatus from its glitzy, glamorous Washington, D.C., Mardi Gras celebration in deference to the state's storm victims. In 2007, the krewe decided to come back with a vengeance and dedicate its 50th gala to addressing Louisiana's woes ' by combining the hot-ticket event with a high-dollar fund-raiser. The beneficiary of the premiere award is Lafayette's Louisiana Emergency Mobile Unit project.

"This year, particularly with our 50th anniversary, we wanted to continue with the tradition of having a function with 3,000 people in Washington and, at the same time, with empathy and compassion to those fellow Louisianians who suffered from the effects of the hurricanes, do something in a positive way to help address our future needs," says Joseph Rault, senior lieutenant and 40-year krewe member. "So, we selected the LEMU concept as the targeted charity for the fund-raiser."

The LEMU system is the brainchild of local physician Andy Blalock, Arkansas doctor Charles Mashek and designer/engineer Ashton Langlinais. After hurricane Katrina hit in 2005, Blalock manned the medical clinic at the Cajundome, while Langlinais handled the technology. Blalock's long-time colleague, Mashek and his wife drove down from Arkansas to help with the effort. Within the first 10 days, the physicians saw more than 3,500 evacuees seeking medical treatment. The majority of these patients needed treatments such as insulin shots, medication refills and wound care. "What we learned after Katrina and Rita was that the majority of people who came in to seek emergency attention tended to be ones who didn't necessarily require an emergency room visit," Blalock says. "If they were to go to an emergency room, they would quickly overwhelm the hospital's ability to handle the patient flow and could potentially cause a public health problem."

This revelation prompted the three volunteers to devise a future solution for this patient surge problem in the event of other major disasters, such as hurricanes, floods, industrial accidents, chemical spills, train derailments, pandemic outbreaks and terrorist attacks. The idea they developed was a "chameleon" system of 12 components, consisting of five clinic trainers, a mobile pharmacy, a mobile command center, sleeping quarters, mental health facilities, a water purification facility, a food preparation unit and storage trailers. The units could also be converted for non-disaster uses, including blood pressure screenings, glucose screenings, and disseminating health information. One storage trailer and a clinic trailer are complete, while two others are in progress. Each unit costs about $100,000 to produce.

Rault says the krewe selected LEMU as its first award recipient "because it's mobile, it's medical, it's good for deployment to any part of the state, and it's an immediate response in case of crisis, need or emergency." The fund-raising proposal came up at a Petroleum Club Sunday brunch between Rault and fellow krewe member and Senior Lieutenant Joe Broussard of Lafayette. The krewe tapped Rault and Boysie Bollinger of Lockport to serve as co-chairs and appointed a committee of 30 volunteers. It intends to raise the money by asking its 500 krewe members and friends to support the project.

The Mystick Krewe hopes to solicit at least $500,000 to purchase additional LEMU units. "We would buy as many of those units as we could afford, depending on how much money we raise," Broussard says. "They would bear our logo, so wherever they go, the Krewe of Louisianians would be recognized as the entity that paid for those units. We have never raised money in the past; this is a departure. It was justified by one of the worst disasters to ever hit the state."

The LEMU fund-raiser will be the featured event at the Friday Night Captain's Dinner Dance on Feb. 9. Former NFL Commissioner Paul Tagliabue and Federal Coordinator for Gulf Coast Rebuilding Donald Powell will headline the presentation.

This event is just one of the many functions occurring during Washington's Mardi Gras extravaganza, set for Feb. 8-10. For years, it's been one of the most coveted tickets in town. With three days of jam-packed activities, politicians, members and guests are in for non-stop partying and schmoozing. "In effect, you don't have to leave the Hilton hotel for three days if you don't want to," Broussard says. "There is enough hospitality, food and activities going on to almost keep yourself [entertained] for three days."

The krewe's 50th anniversary gig promises to be its biggest ever. The festivities begin on Thurs., Feb. 8, with the "Louisiana Alive" reception at the Hilton ballroom. For the informal event, the krewe flies in Louisiana's premier chefs, food, and bands to entertain 3,000 to 4,000 guests. The Louisiana Seafood Promotion and Marketing Board and the Louisiana Oyster Task Force are providing raw oysters and shuckers, as well as baked oyster dishes from Galatoire's Restaurant, Acme Oyster & Seafood House and Drago's Seafood Restaurant in New Orleans. Lafayette is bringing its own contingent, Team Acadiana, featuring chefs Mike Richard from Coyote Blues, Roy Angelle from Oakbourne Country Club and Donovan Solis from Randol's Cajun Restaurant.

Following Friday night's black tie dinner-dance, the krewe gears up for the main event, the Mardi Gras ball. Reigning over this year's gala is King Boysie Bollinger and Queen Elizabeth Claire Chance, daughter of Thomas S. and Lisa Chance and granddaughter of John E. and Joretta Chance of Lafayette. In honor of the krewe's golden anniversary, the tableau will feature 23 past royalty members, including New Orleans-based Rault and Lafayette residents Broussard, Bridget Edwards Boustany, George Rodrigue and Richard Zuschlag. After the court, 24 festival queens and 39 princesses are presented, the king and queen's throne will break away from the main stage, transform into a float, and officially start the Mardi Gras madness. "The 500 krewe members join in ' five bands, five floats ' they throw beads, doubloons, favors ' it's crazy," Broussard says excitedly. "It's almost identical to what you expect to see on Canal and St. Charles during Mardi Gras ' people going crazy in the booths, looking for a favor, bead or memento; women in $10,000 evening dresses crawling around on their hands and knees ' it's typical."

For the first time, Lafayette will sponsor a hospitality suite, hosted by Glenn Armentor, the Greater Lafayette Chamber of Commerce, Lafayette City-Parish President Joey Durel, the Lafayette Convention and Visitors Commission and Lafayette Economic Development Authority, with a special appearance by the Marquis de Lafayette. "They will use the suite to network and having meetings in, to increase tourism and to try to get some of these people who are in attendance to come visit, talk about and promote Lafayette," Broussard says.

The gala is not just important to Lafayette, but the whole state as well. "It puts a face of the state up on a national platform," Rault explains. "It is extremely important."