Lafayette City-Parish Councilman Bruce Conque, a former broadcaster who now works as a public relations consultant, is taking a new job with the Greater Lafayette Chamber of Commerce and resigning his District 6 council seat. Chamber sources confirm Conque will be stepping into a newly created vice president’s position, handling marketing and government relations. An official announcement is being scheduled for later in the week. Reached this morning on his cell phone, Conque would neither confirm nor deny the move. “I’m not at liberty to discuss it at this time,” he says. Chamber President Rob Guidry left town this morning and could not be reached for comment. Sources with knowledge of the deal asked to remain anonymous because some members of the Chamber may not yet have been contacted about the new hire. 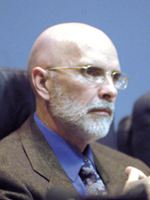 Conque is expected to resign his council seat due to the heavy time commitment involved with the new position, as well as complications that could arise from his new responsibilities as a chamber liaison to city-parish government. Sources cited Conque’s active involvement in the community and deep knowledge of local government as making him uniquely qualified for the position. Less than a year into his second term, Conque is the senior member of the city-parish council, which saw an 8-member turnover last year due largely to term limits. Conque currently chairs the council’s finance committee, is council liaison to the planning and zoning commission and library board and is a previous member of the Lafayette In a Century (LINC) committee. He also has been heavily involved with the chamber. He is a past graduate of the Chamber's Leadership Lafayette class and has previously been honored as the Chamber’s Diplomat of the Year.

Following Conque’s resignation from public office, the city-parish council will appoint a replacement for the District 6 seat until a special election can be held to determine who will fill out the remainder of Conque's term. The earliest the special election could be held is April 4, 2009.