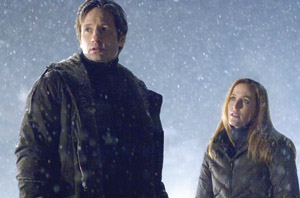 Fox Mulder (David Duchovny) and Dana Scully (Gillian Anderson) rejoin the FBI to assist with a missing-persons case in The X-Files: I Want to Believe.

For all its many themes and mythologies — the sweet sadomasochism of its constant confounding of faithful viewers, dropping as it so often did tiny crumbs of the out-there truth with one hand, only to cruelly and inevitably take them back one by one with the other — The X-Files had only a single core value: belief. Or, more accurately, the drive, the desire, the determination to believe.

Series creator Chris Carter and the many scribes he attracted to the now-classic weekly series were always writing about faith, whether it was about fidelity to friends and ideals, devotion to some super Unknown, or certainty of a vast, slow-moving and bureaucratically controlled conspiracy of men and their alien masters. Everyone on the show believed in something, even if sometimes it was only themselves. And even if sometimes it was nothing at all.

The show ran on the fumes of its protagonist’s stubborn, alternatingly inspiring and painful-to-watch refusal to stop believing. The aptly named X-Files: I Want to Believe movie runs on a similar unwillingness to let go, both on the part of its fans and its creators. But unlike Fox Mulder, perhaps we have suddenly and sadly discovered — with this frustratingly lackluster and potentially final film — that still wanting to believe can be a sorry substitute for simply being able to.

The movie picks up at an indeterminate length of time after the series’ ninth and final season. Enough time has passed that Scully (Gillian Anderson) has gone back to being a full-time physician, tackling the rounds and charts and surgeries of her ailing patients with the same sort of impatience and probity that she demonstrated in the basement office of FBI headquarters for so many years. She’s sadder now, a little more sharp-edged, and director Chris Carter and cinematographer Bill Roe shoot her as such. Long auburn hair framing crystalline eyes and drawn features, Scully could be the melancholy woman of her hospital’s name: Our Lady of Sorrows.

Because sorrows she has. Her beloved partner Fox Mulder (David Duchovny) remains a wanted man, a prison escapee once condemned to death. He spends his days in a remote farmhouse, hiding almost in plain sight, a bearded hermit who clips newspaper stories and wallpapers his office with them. After all this time, he’s almost become the cliched conspiracy theorist he was so often accused of being, saved only by his signature and totally-in-tact sardonic sense of humor and sunflower seed-addiction. Also, her beloved son William (who might have also been Mulder’s) has long since disappeared, given away for his own protection. Yes, Scully has had a lifetime’s worth of trouble — and then the FBI comes knocking again one bitterly cold winter day.

A female FBI agent has gone missing, and a psychic pedophile priest (Billy Connolly) claims to have knowledge of the case. With no leads except a strange one, a severed male arm, found as a result of the priest’s fragmentary visions, a young FBI special-agent-in-charge (Amanda Peet) wants Mulder’s X-pertise and offers clemency in exchange for his assistance to the agency that spent a career span trying to show him the door. Scully talks Mulder into cooperating with the request — and then he returns the favor, kindly coercing her to be his partner once again.

The details of the case are singularly unimportant, the first clue that this X-File is not like any we have seen before, no matter the familiar recurring location-and-time stamp in the lower lefthand corner. The film is something of a character study, and surprisingly that character is Scully, the scientist satellite pulled into the orbit of Mulder’s obsessions. Her faith, her fear, her frustration war for supremacy.

But the film is also a couple study. Six years ago, we left Mulder and Scully curled up together in a nondescript hotel room, on the run, talking about belief and hope (and a December 2012 alien invasion that this film pretends no longer looms by not mentioning even once). Carter seeks to show us what those years of loss and love and denial have come to. He gives us Mulder and Scully as a slightly estranged but loving couple, laying in bed commiserating about sick kids and insomnia and tantalizing details in the case of the missing FBI agent.

It’s a jarring shift from the cerebral, latent love they shared in the series. And it’s not quite enough to hang this movie’s hat on, although Carter tries valiantly. Worst of all, for a show that did it so well for so long, I Want to Believe doesn’t leave its audience wanting more. Not of the characters, not of the questions. The truth is undoubtedly still out there, but Mulder and Scully won’t be the ones to find it now. They’ve done their time, and now they just want some peace — which was the one thing they were never supposed to find